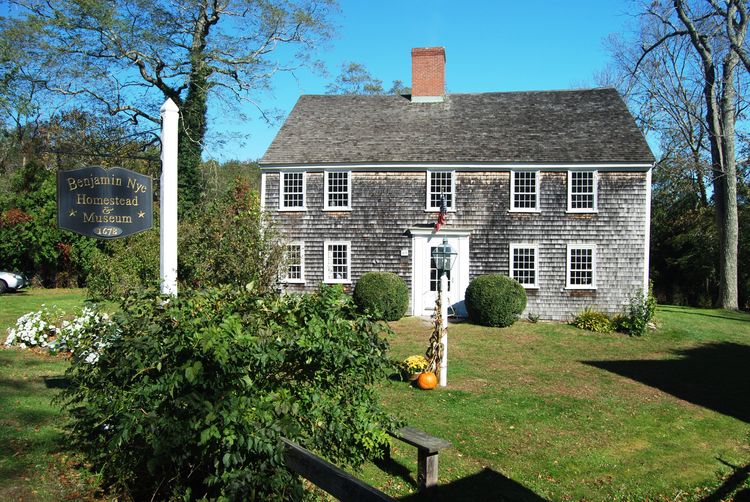 In 1678, English settlers Benjamin and Katharine Nye settled on this property and built this home. Seven generations of Nyes lived here between 1678 and 1910.

The Nye home is a timber frame house. Hand-hewn timbers of oak and pine were fastened together with interlocking joints held in place by wooden pins called trunnels.

Look at the shape of the house. When first constructed, the house had almost the same floor plan as it does now, but it was styled as a saltbox. It had a long, sloping back roof, a central chimney, and two large fireplaces. If you traveled back to the Town of Sandwich in the early 1700s, you would be surprised to find most houses were brightly colored. The Nye home was painted red.

Look at the stone foundation. The stones were quarried locally. They sit on top of the ground and support the sills on the first floor. Benjamin Nye used white pine boards to construct the sheathing. Typically, these boards came from a northern sawmill and arrived by coastal vessel, which might have anchored just down the street at East Sandwich Beach.

The buildings on the property have constantly changed over the last three and a half centuries. In the photo included in your audio guide, you can see the west ell, now gone, which was attached to the house in the eighteen twenties to accommodate the Nye Tavern. If you visited here in the early 1800s, you also would have found a carriage house behind the home.

Let’s move to the next stop at the edge of the pond , just down the hill from the homestead.