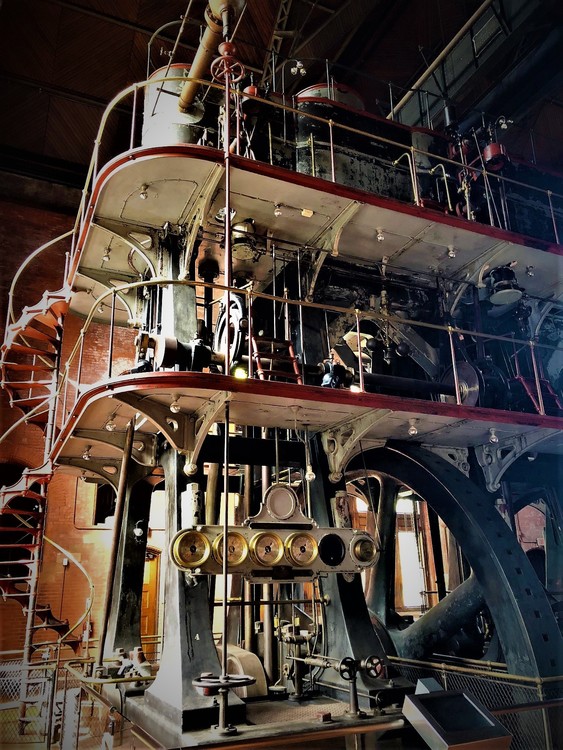 The arches you just passed under were punched out of the end wall of the original building and the new addition you now stand in was constructed in 1898. You’ll notice the ceilings in this area are higher than those in the original building, since they did not want to run into the same problem of not being able to fit a large engine in the space, like they did before.

This entire addition was built just to house the mammoth steam engine before you. You can see three stories of the engine where you stand, but there are actually another two stories of pumps below ground. This Allis engine provided the station with the ability to push out an additional 30 million gallons per day. And it was extremely efficient: it broke the national record for the most water pumped per ton of coal burned as soon as it was brought online. Unlike the Leavitt, with its unique diagonal piston rods, the Allis has a simple vertical stroke. Both, however, are triple-expansion steam engines, which means the power of the steam was used three times before it was spent.

With its completion in 1898, the Allis engine’s efforts, coupled with those of the existing Leavitt and Holly-Gaskill engines, meant the station could finally meet the demands of the city. Putting out as much as 60 to 100 million gallons of water per day, the station ran 24/7 -though one or two machines might sometimes be down for maintenance, there would always be at least one running to supply the city with water. Continue to your right and walk behind the Allis engine. If you peer through the black grates on the floor, you can catch a glimpse of the massive pumps below your feet that helped to make this pumping station the hub of the Boston Water System for decades.

When you are ready to move on, continue around the other side of the Allis until you end up in the center of the Great Engines Hall where the chairs are located, facing our final addition to the pumping station: The Worthington-Snow Pumping Engine.