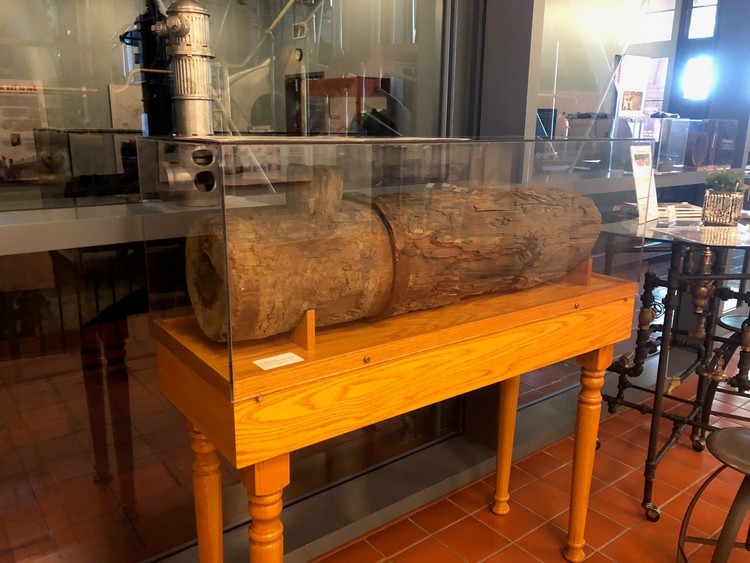 Welcome to the Metropolitan Waterworks Museum! We’ll start by taking a step back in time. If we lived in, say, the 1700s, how do you think we would be getting our water? Before the public water system was established, people collected their water in three main ways: by scooping it up in buckets from the nearest lake, pond, or stream; by using a well or hand pump to tap the ground water; or simply by catching it in rain barrels and cisterns.

In 1795, “the Aqueduct Company” of Jamaica pond formed, creating the first private waterworks system that served Boston and Roxbury. Being a private system, only those who could afford to pay had the luxury of receiving water piped to their homes.

You now stand before a wooden pipe similar to what was used in this first private waterworks system. As you can imagine, wooden water pipes had their share of problems: the wood could swell and contract, organisms could grow and eat away at the wood, and your pipe could only be as wide as the trunk of a tree. However, wood was a cheap and plentiful resource, and for the handful of people who could take part in this private system, it sufficed.

As the century turned, the American Industrial Revolution was beginning, with factories popping up all over, and new workers moving into the city to fill them. Unfortunately, with more and more people crowding into urban centers, it was not long before epidemics like Cholera and Typhoid Fever swept through Boston. Over time, this and other factors finally led the city to determine that a Public Waterworks System, where everyone could have access to safe water, was necessary.

In 1848, Boston’s first Public Water System is established with the completion of the Cochituate Aqueduct, which allowed water to flow from Lake Cochituate, formerly known as Long Pond in Natick, to Boston. It was thought at the time that the supply from Lake Cochituate would last nearly 50 years, but it soon became apparent that the explosive population growth still being experienced by the city meant this supply would be inadequate long before then. In addition, as new cities and towns were annexed to Boston, people began to settle in more topographically high areas, so the simple gravity powered aqueducts would no longer work for everyone.

And that’s where our museum building comes in. You stand now in the former High Service Pumping Station. The reservoir across the street was completed in 1870 to provide drinking water storage and supply closer to the city. Soon after, the decision was made to push further West, and source water from the Sudbury River, out near Framingham, and this station was constructed in 1888, for the sole purpose of pushing the water up to a higher level, so it could then flow by gravity to everyone who needed it.

You will now enter the Great Engines hall to see the giant machines that made this happen. Turn right and head to the far wall. Your next step will be in front of the Leavitt Pumping Engine info panel.