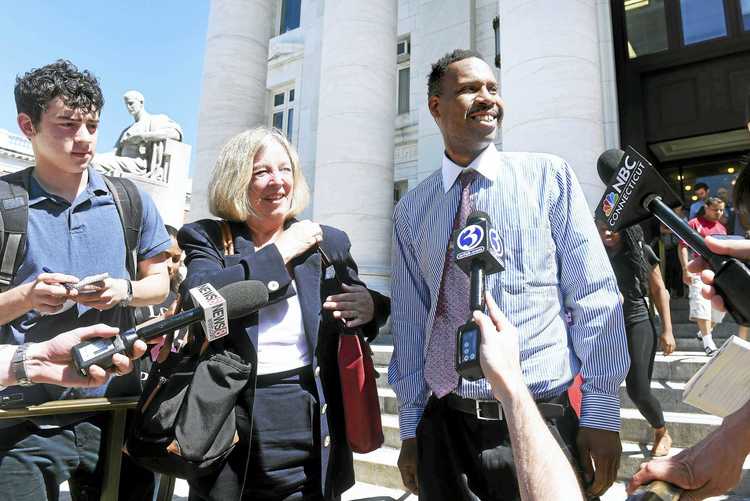 Corey Menafee, a Black New Haven resident, worked as a dishwasher at a Yale college, which was previously called Calhoun College. Menafee grew up in New Haven and has two children. He graduated from Virginia Union University in 2001 with a degree in mass communication, before starting his job at Yale.

In 2016, inside Calhoun College, Menafee saw a stained glass window depicting two enslaved African Americans working outside in what looked like a cotton field. He said he was tired of looking at the “racist, very degrading” image. So, Corey Menafee grabbed a broom and smashed the stained glass window, knocking it down from where it was hanging and breaking the glass image. He was arrested and charged with a first degree felony charge of criminal mischief, and he lost his job at Yale.

But at this very courthouse, a large community gathered in support of Menafee. There was a press conference and rally on the steps outside the courthouse, and community members crowded the courtroom to show their support. Eventually all charges against Menafee were dropped, and Menafee was able to get his job back. Menafee’s actions reignited an ongoing campaign to change the name of Calhoun College, which had been named after former Vice President, John C. Calhoun, an advocate of slavery. Yale students and New Haven community members had been protesting the name of the college for many years, calling it racist. Menafee’s actions helped bring this campaign to a larger audience. In 2017, about a year after Menafee broke the stained glass window, Yale finally changed the name to Grace Hopper College.