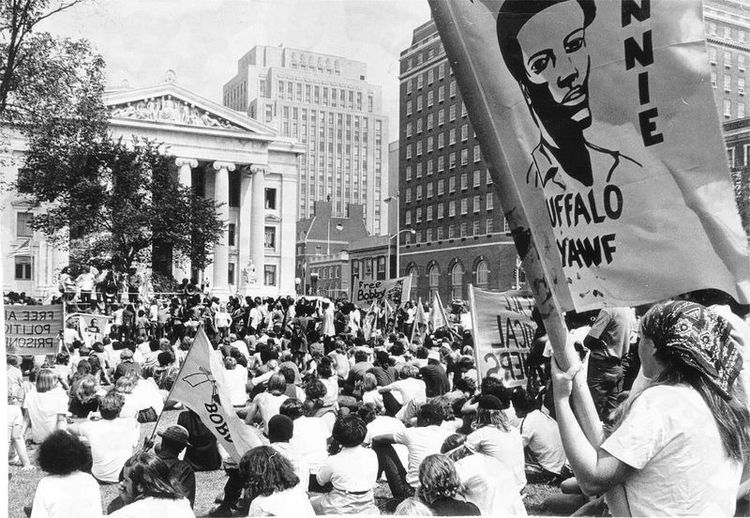 Alex Rackley, a 19-year old member of the Black Panthers was a suspected informant. In 1969, he was interrogated and tortured in New Haven, in the basement of the Ethan Gardens co-op apartment complex on Orchard Street in New Haven’s Dwight neighborhood. Eventually, he was killed by some of the Black Panther Party members. Warren Kimbro, Lonnie McLucas, and George Sams pleaded guilty and served time for this murder.

One of the leaders of the Black Panthers, Bobby Seale, was visiting New Haven at the time, speaking to the Yale Black Ensemble Theater Company. Despite not being present for the murder of Rackley, he was charged for the crime. Ericka Huggins, leader of the New Haven chapter, was also put on trial as her voice was on the interrogation tape of Alex Rackley, though she was not present at the murder.

Bobby and Ericka’s trial had many complications, and throughout it all they were locked up. It took four months to put together a jury, and after a long trial the jury was deadlocked, unable to reach a consensus. During the course of the trial, there were massive protests in New Haven. Tens of thousands of Panthers-supporters showed up to New Haven, and New Haven residents took to the streets. On May 1, 1970 -- May Day -- there was a historic rally in New Haven standing with the Black Panthers and standing up against racism. Make sure you check out the amazing photos from this day, which can be found online.

Instead of a retrial, the judge dismissed charges on Erika and Bobby. In his decision not to retry the case, Judge Harold Mulvey stated: “With the massive publicity attendant upon the trial just completed, I find it impossible to believe that an unbiased jury could be selected without superhuman efforts, efforts which this court, the state and these defendants should not be called upon either to make or endure.”