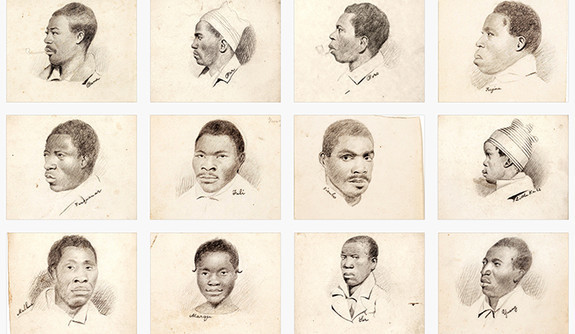 Standing before this statue beside New Haven’s City Hall is a humbling experience. Most New Haveners know a little bit about the Amistad, but the full weight of this history is not often told.

A group of Mende people were kidnapped from Sierra Leone in the 1830s and brought to the Americas. It is important to remind people that in 1807 the African slave trade was abolished, and yet slavers continued to kidnap people and sell them into slavery. That is, the enslavement of these men was not only immoral, it was also illegal.

On board the Amistad, 53 Mende originally from Sierra Leone, were being taken from Havana, Cuba to a sugar plantation on the other side of the island. A few days into the voyage, with Sengbe Pieh “Cinque” as their leader, the Mende captives rose up, taking over the ship by killing most of the slavers. After two months at sea, the ship arrived in the port of Long Island, and the Mende men were taken into custody and charged with murder. When they arrived in New Haven in September of 1839, the 43 Mende people who had survived the journey were marched from Long Wharf to the jail right here below City Hall where this statue stands today. New Haven residents lined the streets to watch their arrival. Colonel Stanton Pendleton, the jailer, charged people money to come see the Mende people.

The Mende did not accept being enslaved or being imprisoned. They fought their charges in court, arguing their capture and enslavement was illegal. Eighteen-year-old James Covey, from Sierra Leone communicated with the Mende men and translated their defense to their lawyer. After several trials, which the Mende won, but which were appealed by US President Martin Van Buren, the Supreme Court finally ruled in 1841 that the Mende captives were not guilty. Justice Joseph Story commented calling the Mende: “kidnapped Africans, who, by the laws of Spain itself, are entitled to their freedom.” At last, the Mende were free again. Many of those on board the Amistad would later move to Farmington, Connecticut for abolitionist support. In late November of 1841, 35 of the original 53 captives returned to their home in Sierra Leone.