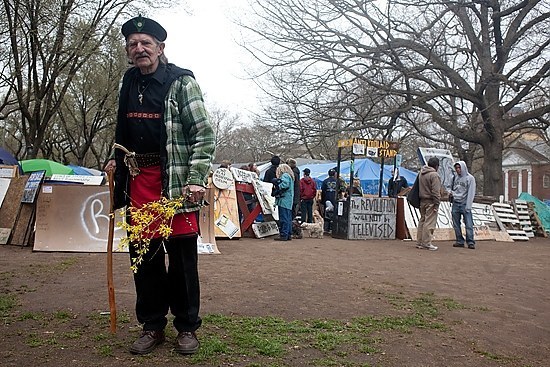 On October 15, 2011, over 100 New Haveners decided to gather on the Green in a movement they called “Occupy New Haven,” a spin off of the Occupy Wall Street Movement happening across the country. The occupy movement was created to protest against economic inequality, in which 1% of our country owns the vast majority of wealth, as well as the corporate influence on the government.

Here in New Haven, for six months, occupiers lived on the green. However, their stay was not welcomed by city officials. The city filed two lawsuits against the group, hoping to evict, but with the help of Lawyer Norm Pattis, the city's suit was blocked, prolonging the occupiers' stay. While occupying the green, the protesters began asking the question: Who really owns the land? Some believed the green belonged to its proprietors who privately own it, others said it belongs to the general public. Occupy New Haven, knowing the history of this region, made the claim that the land rightfully belonged to the Indigenous people from whom it was stolen. Gordon Fox Running Brainerd, who is a Bear Clan medicine chief in the Quinnipiac tribe came to the Green during the occupation. Fox Running talked about how European disease killed thousands of natives, making it easier to claim their land. He also talked about how Europeans took advantage of native americans and stole their land.

On April 17, 2012, the city ruled that it does have the right to evict the occupiers from the green. The next morning, police began dismantling protester’s tents and removing them from the green. Some occupiers left peacefully while many others resisted leaving. By the end of the clearing, New Haven police arrested 13 occupiers charging them with disorderly conduct and inference. Although the Occupy movement didn’t last in its original form, their ideals live on in leaders like Alexandria Ocasio Cortez and the progressive left who are advocating for the working class and fighting against income inequality.