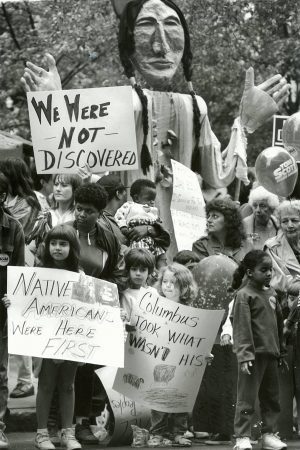 As you near the Green, I will be sharing with you just one of the historic movements that took place here, a struggle that is still ongoing in our city and country: the Columbus day protests of 1992.

Columbus day is a U.S. holiday that is supposed to celebrate Christopher Columbus’s arrival to the Americas. However, many people have long believed that Christopher Columbus is not someone who should be celebrated, given his violence and murder of indigenous people. Beginning in 1990, South Dakota was the first state to change Columbus Day to Native American Day, and many cities and states have followed suit.

In New Haven in 1992 people gathered to protest Columbus day, the parade, and monument. Signs at the protest read: “We were not discovered” and “Columbus took what wasn’t his.” Due to this the Columbus day committee struggled with lower turnout rates and the consistent protests that continued. The committee finally discontinued the parades for two consecutive years. Until unfortunately, it was revived in surrounding towns.

Today the struggle continues in New Haven. While the Bridgeport school system changed to Indigenous Peoples’ Day in 2015, New Haven continues their celebration of Columbus, upsetting and angering many. In fact, last year our city saw proposals and protests to rename the New Haven school Christopher Columbus Family Academy. The Board of Education explained it was up for consideration due to the fact that half the school's population are descendants of the people who Columbus’ atrocities were committed against.