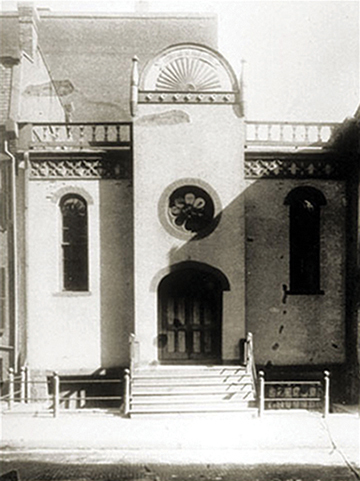 Looking around this site today, you will see restaurants and parking garages. Sadly, you will not see the beautiful church that once stood here, and had a major impact on New Haven’s Black community in the 1800s. Too often Americans think that the South was the only place where slavery and segregation occurred. It is forgotten, or untold, that both of those things happened in the north, in Connecticut, right here in New Haven.

Emancipation bills to free enslaved people were rejected by the Connecticut Legislature in 1777, 1779, and 1780. In 1784, Connecticut finally passed a law for the abolition of slavery -- but like many northern states, this did not immediately abolish slavery, but rather was a gradual emancipation. Slavery in Connecticut was not fully outlawed until 1848.

While slavery existed in Connecticut, there were also free black communities living in New Haven, and facing discrimination. In 1690, for example, Connecticut passed a law that gave black people a 9:00pm curfew, prohibiting them from going outside, a history that feels important to remember as we watch cities and states impose curfews on Black Lives Matter protestors.

Many other laws discriminated against African Americans and segregated them. In 1820, for example, Black people in New Haven were only allowed to worship on the balcony of the First Congregational Church, a predominantly white church. Black worshippers tired of being treated poorly partnered with Simeon Jocelyn, a white abolitionist, to hold religious services with them at his home. After Jocelyn agreed, four men and eighteen women came together forming what would be the first Black congregation in New Haven. In 1824, the congregation organized as the African Ecclesiastical Society and relocated right here to 105 Temple Street, which would come to be known as the Temple Street Congregational Church.

The Church’s first pastor was Reverend James W.C. Pennington, who had escaped slavery and made his way to New Haven. Amos Beman became the church’s second pastor in 1841. Through his role at the church, he became a leader in abolitionist movements throughout New England. Beman used this church as a sanctuary for enslaved people who had freed themselves, aiding them in relocating or starting a new life here in New Haven.