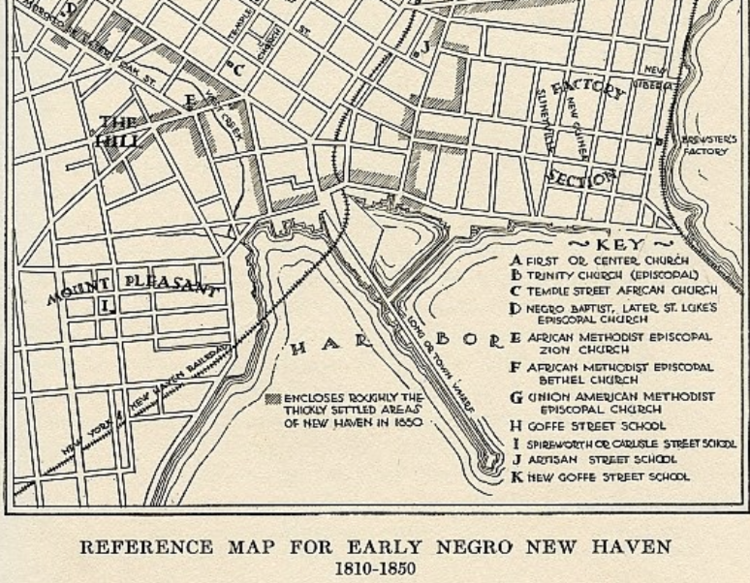 This neighborhood which we now know as the Hill was once called Spireworth or Mt. Pleasant. This land was purchased in 1830 by white abolitionist, Simeon Jocelyn, who wanted to create an integrated community here. This neighborhood, outside of the center of New Haven, was modeled off of New Haven with this park, once called the Spireworth Green as the center. The park was renamed Trowbridge Square, after a white man, Thomas R. Trowbridge who developed homes in the area. He also built a home for himself on Columbus Avenue, and was a conductor on the Underground Railroad.

In the 1800s, this community was home to African Americans who had escaped slavery, African Americans who were free, and working class whites, including recent immigrants from Ireland. Despite the fact that this neighborhood was integrated, most of New Haven’s institutions were not. For example, the schools in New Haven were segregated, which meant that Black children were not permitted to go to school with white children. In response to this, Black communities created their own schools for their children. The first Black school was created in 1811, called the Artisan Street Colored School and was located near Wooster Square. The second Black school -- called the Spireworth or Mt. Pleasant School -- was created in 1825, and stood right here on Carlisle Street off Trowbridge Square Park. Finally, the Goffe Street school was the third Black school, formed in 1864, located in the Dixwell neighborhood.

These schools, unfortunately, lacked resources because they did not have government support. Despite a lack of funding, the schools had Black teachers which made Black students feel more comfortable and connected to their school communities. In 1871 Connecticut passed legislation ending segregation, and the last Black school closed in 1874. Now Black students were able to attend white schools, which were better funded. However, most of the teachers were white, and many Black teachers and principals lost their jobs.