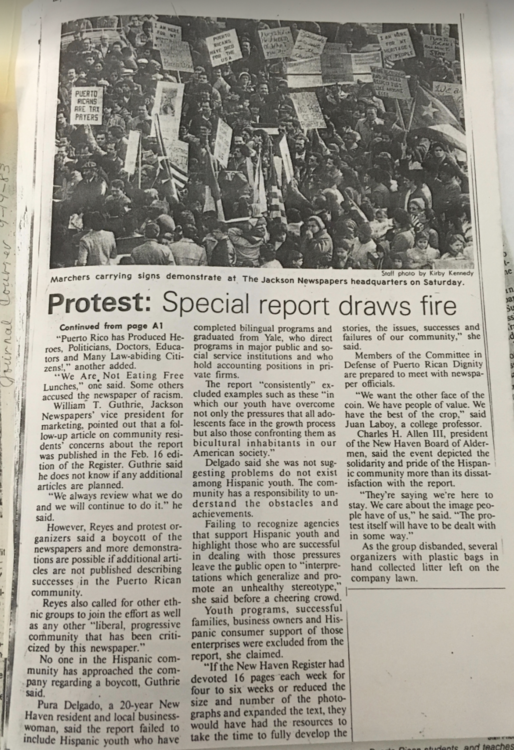 Standing before or picturing Jordan Furniture, you might be surprised to learn that an earlier version of the New Haven Register, run by the Jackson Family, was once located here, starting in the early 1980s. In the 1980s it was often called the Jackson Newspaper Plant. The event we want to highlight occurred here on February 16, 1986. On that day the Register published a report they called “Americans Between Two Shores,” which they claimed would show the lives of Puerto Rican people on the island and in Connecticut. The reporter flew out to Puerto Rico and while there, he took photos. The photos taken were based upon the poorest parts of Puerto Rico and the reporter’s descriptions presented the community in a negative light. The article also portrayed the people as being satisfied with being poor and living in rough conditions. The article did not show the more modern or more updated parts of Puerto Rico. Nor did it address the reasons Puerto Rico was experiencing this poverty.

Once the report was published, many Puerto Ricans took great offense to what was said, and demanded they rewrite the entire article to make it more balanced, highlighting those who have left their poverty to create a life for themselves, and explaining the root cause of poverty. One person said they created a one sided view of Puerto Rico. “It pointed out a number of problems the Hispanic community faces but failed miserably to show our successes.” An entire community rallied together to make their voices heard by the Jackson Newspaper and the wider community. They called for the newspaper to switch out the initial article for one that is more factual. This protest attracted 2,600 people of all different ethnic groups who valued the same things. They shouted: “Puerto Ricans have dignity and culture Jackson: respect us.”