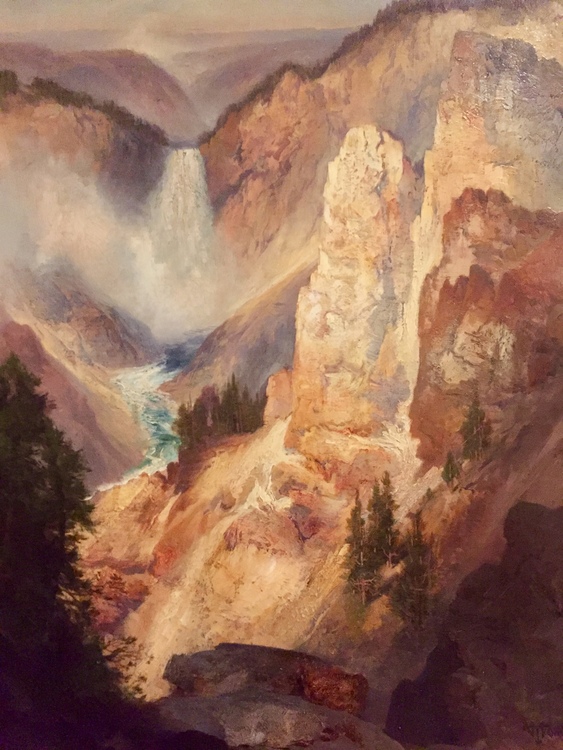 In 1871, Dr. Hayden led the U.S. Geological Survey into the region that within a year would become Yellowstone National Park. Hayden, interested in all aspects of the development of the American West, realized that tourism might be significant in the future. His expedition party included scientists, engineers, photographer William Henry Jackson, and an unofficial member, Thomas Moran.

Thomas Moran was an artist well qualified to paint the extraordinary vistas of the Yellowstone and surrounding regions. He had studied the work of important American and European artists, and had painted landscapes in remote areas throughout the Northeastern United States. The 1871 excursion became the first of many journeys throughout the western United States, as a result of Moran’s name linked with the majestic scenery of the United States.

In 1876, the magnificent scenery of the Yellowstone region was first seen in color by a large audience through publication of the book titled, The Yellowstone National Park, and the Mountain Regions of Portions of Idaho, Nevada, Colorado, and Utah, issued by Louis Prang, with fifteen chromolithographs based upon watercolors by Thomas Moran and descriptive text by Ferdinand Hayden. This publication was a remarkable undertaking, and in fine art printing it established a new standard. A successful publisher and commercial lithographer, Louis Prang, originated the project. Moran and Prang selected the subjects of the images together, and the sharp delineation and clear color of Moran’s watercolors worked well for the chromolithographic process.

In the introduction to The Yellowstone National Park, and the Mountain Regions of Portions of Idaho, Nevada, Colorado, and Utah, Hayden wrote: “So strange, indeed are the freaks of color which nature indulges in habitually in this wonderful country that, it will no doubt require strong faith on the part of the reader in the truthfulness of both artist and writer… it is a just subject for national pride to see a work of this character which takes equal rank with anything of the kind ever undertaken in Europe produced wholly on American soil.”

This information is adapted from Sarah Erwin’s text on Moran and the Yellowstone. She was a former Gilcrease Museum Curator of Archival Collections.