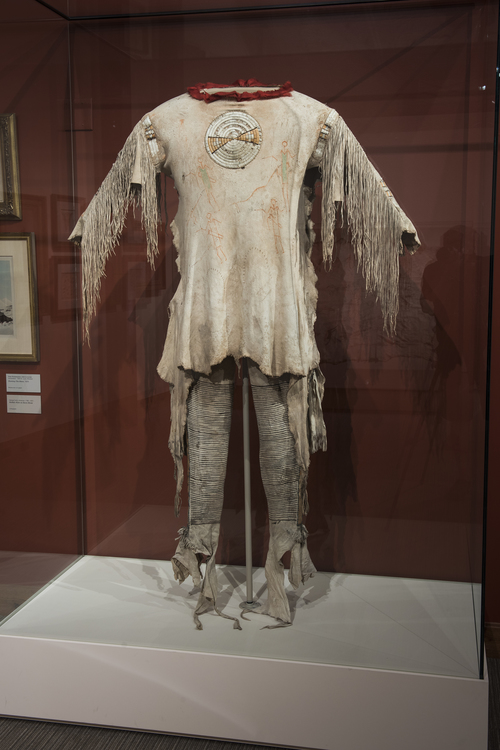 The construction technique, painting style, and quillwork on this rare Northern Plains shirt and leggings testify that the garments were created early in the nineteenth century and, replete with symbolism, most likely belonged to a high-ranking individual. We can also be certain that it was the garment of a powerful and eminent man. For many years it remained in a collection in Belgium before returning to the American West. Belgium was the home of numerous missionaries who travelled to North America in the early nineteenth century in an attempt to carry out their conversion work among the northwestern Plains and the eastern Plateau region including the Blackfeet, Kutenai, and Flathead tribes. This shirt and leggings was housed at a monastery in Belgium and therefore, scholars feel that a missionary obtained this shirt and leggings in America and took it to Europe.

The shirt is made of two soft-tanned deerskins, probably from prong-horned antelope or white-tailed deer. Slight tailoring or cutting has been applied to the arms where they are joined to the body of the shirt. The smooth surface is ideal for the pictographic motifs drawn upon it. The sides of the shirt are open, the edges of which are slightly fringed, a feature which extends to the bottom of the shirt and lower leg portions. This is a technique employed on early Plains shirts. The use of red trade cloth at the neck suggests symbolic associations.

On the back of the shirt (shown facing the viewer) a figure with a long bow-lance is rendered to the right of the quilled disc, which is generally associated with military societies or shamanistic powers. This lance is embellished with eagle feathers and ermine strips, note the lines with black tips top and bottom of the lance. The artist-explorer Karl Bodmer depicted a similar bow-lance in his rendering of an Assiniboin warrior. These types of lances were also carried by the Blackfeet and were illustrated by artist George Catlin in his rendering of a Blackfeet medicine man performing a ritual over a dying warrior.

The quilled discs are definite but not exclusive to Northern Plains clothing. In 1834, the German explorer Maximilian Prince of Wied reported that such large discs were considered an Assiniboin feature. However, by Maximilian’s time Blackfeet warriors were wearing shirts exhibiting the large quilled disc. The quillwork on the shoulder and armbands of the shirt has been found on early ceremonial shirts from both the Northern and Central Plains. This shirt also exhibits a quill technique of early Northern Plains in that each lane of the armbands has the appearance of being made up of diamonds.

The pictographic exploits painted on this hide suggest that the garment is of the type that would have been worn by an individual of both high shamanistic and military status. Striking pictographic depictions include ten human figures, weapons, guns, bows, spears, and war axes. All are outlined in red. Eight of the human figures show a predominance of greenish-blue paint on the body and two figures on the back, facing the viewer, are outlined in red and one carries a ‘U’-shaped quiver. The rendering of important details includes the figure to the left of the disc that has intricate painting on his shirt. This figure has a ‘U’-shaped quiver and carries a feathered calumet with the black tips of the eagle feathers being carefully rendered. Attached to his head is probably an otter skin. Such a feature occurred on a shirt collected by Paul Kane in the 1840s. The combination of a calumet and the special head regalia suggests that the individual depicted, presumed the original owner of this shirt, was a Medicine Pipe Bundle owner. Described in the mythology of the Blackfeet as a gift from the Thunder Powers, Medicine Pipes and associated accoutrements were believed to have powerful influence in warfare. This figure illustrates its employment in a particular combat.

The V-shaped human figures are very distinctive, and it is possible that the ‘V’ feature conveys a type of body covering. Hide armor was worn by the Plains Indians and was first described by Lewis and Clark in 1804.

Next
COURAGE & CROSSROADS: A Visual Journey Through the Early American West
HOME