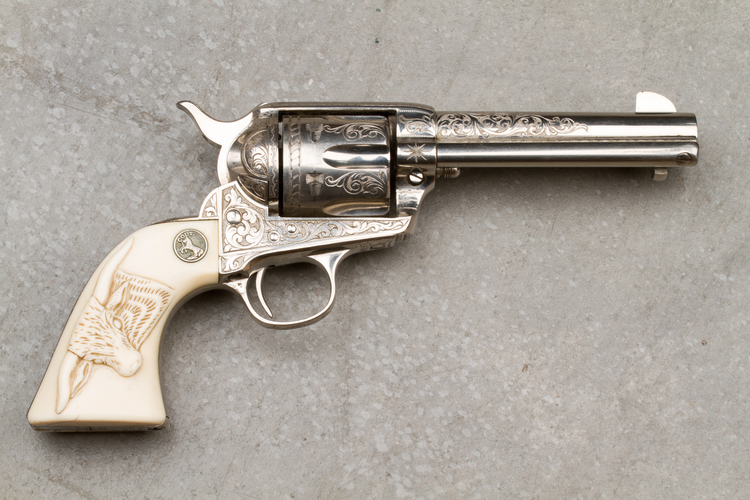 Western dime novels, films, and television series have greatly overplayed the myth of cowboy gunfights and barroom brawls. Nevertheless, almost all cowboys in the 19th and early 20th centuries carried guns. They were used to warn off men and animals, relieve the suffering of injured stock, or maneuver a herd of stampeding cattle. The first handgun commonly associated with life in the post-Civil War American West was the Colt Model 1860. Originally developed for the Union Army, many former soldiers brought these guns to western America as they started their new lives on the open range. The revolver used most by cowboys was the single action 45 caliber or 44-40 Colt Model 1873. A cowboy was well prepared for emergencies with a Colt on his hip and an 1873 Model Winchester rifle or carbine in his saddle scabbard. Colt and Winchester models, as well as later models, accepted the same type of cartridges, thus making it easier to carry and load ammunition. In 1877, Colt introduced a double-action revolver that was smaller, lighter, and could be fired six times after being cocked only once. Although the appeal of these and other technically superior guns was great, life on the range seldom required a rapid-fire weapon.