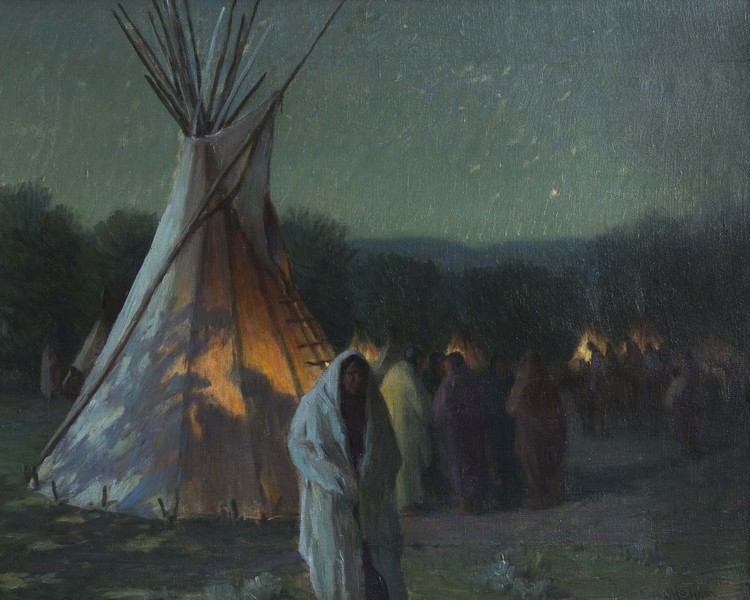 Spanning Montana, Wyoming, North Dakota, South Dakota, and Nebraska, as well as the two Canadian Provinces of Alberta and Saskatchewan, the Northern Great Plains is a unique ecosystem and one of the largest prairie grasslands in the world. This region was once home to millions of bison, pronghorn antelope, and elk.

Gil Waldman said: “I particularly delight in finding works by artists from the eastern United States and Europe who came west of the Mississippi to record their personal impressions, then returned home – Albert Bierstadt, Robert Henri, Valentine Walter Bromley – as well as those who made the American West their home; the Taos Society of Artists, Charles Russell, Leon Gaspard. Each conveyed their perceptions in their own distinctive style.”

Western artist Charles Marion Russell depicted the human and animal interactions set among the vast expanse of prairieland of the Northern Great Plains, and Valentine Walter Bromley traveled from England to Yellowstone, noting the realities of hardships such as Crow Family on the Trail (1874), in which the artist depicts a family encountering a rattlesnake. Bromley returned to England only to pass away at the age of 29 from smallpox, right before being elected to the prestigious Royal Academy of Arts.

Joseph Henry Sharp was born in Bridgeport, Ohio, and traveled to the American West, living at the Crow Agency in Montana. His paintings in this exhibition entitled Winter 1904 Crow Reservation Montana (1904) and Moonlight & Firelight Crow Reservation Montana reinforced popular Euro-American romantic notions about the “vanishing race” and the noble Native Americans who had remained uninfluenced by mainstream culture. However, Sharp’s social awareness of both Plains and Pueblo cultures was astute since he had lived in Montana and Taos, New Mexico. In his writings, the artist described the United States government’s bureaucracy and the harsh reservation realities that included poverty and disease.