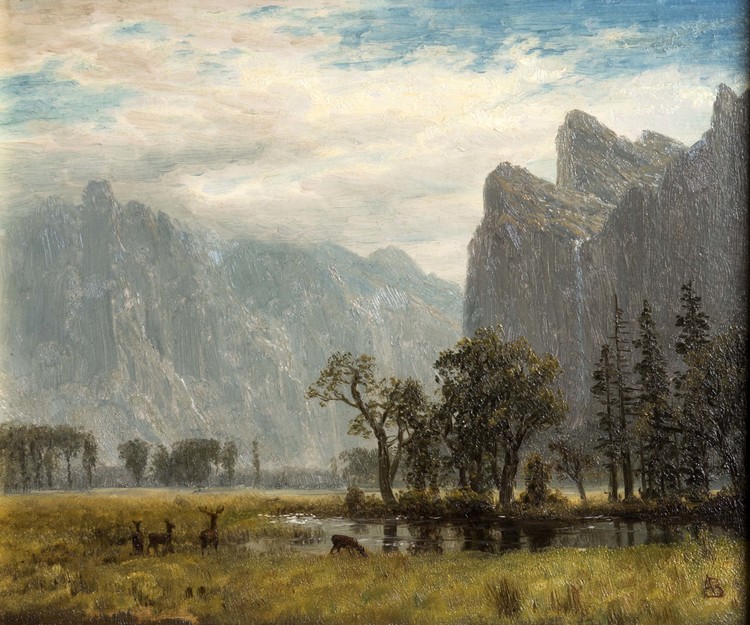 “As we approached Green River from the Rock Creek Valley, we had presented over our right a wonderful exhibition of banded or variegated clays in an almost vertical bluff of great height.” –Dr. Ferdinand Hayden, Tuesday, May 30, 1871

In 1871, Dr. Ferdinand Hayden made a historic scientific expedition through the Utah, Idaho, and Montana Territories to the Yellowstone Basin. The expedition’s findings led the United States Congress to establishing Yellowstone as America’s and the world’s first national park the following year. The expedition is also famous for producing the earliest on-site images of the region by its expedition artist Thomas Moran and by its photographer William Henry Jackson. Moran, a Hudson River School artist, was the first American painter to capture the grandeur of Yellowstone and the Grand Canyon. Today the Mountain West (also known as the Mountain States) is comprised of Wyoming, Montana, Idaho, Nevada, Utah, Colorado, New Mexico and Arizona.

On display in this exhibition is Thomas Moran’s Green River Wyoming. An artist-explorer born in England, Moran found inspiration in the American West and the looming and craggy cliffs surrounding Green River provided him with his first sketches he made in the area. Moran was enroute to Idaho to meet Dr. Hayden and together embark on their survey of the vast Yellowstone region. Utilizing his own sketches from this trip and others he created on later trips, Moran continued to produce throughout his career several famous oil and watercolor paintings of Green River until 1918 when at the age of 81 he painted his final scene of the region. Dr. Hayden named Mount Moran, the largest of the three Grand Tetons, after his artist colleague.

Another explorer and renowned member of the Hudson River School of artists, Albert Bierstadt left Germany with his family when he was two years old. On his first trip to the American West in 1859, at age 29, Bierstadt traveled to the Wind River Mountains in Wyoming with Colonel Frederick W Landers’s Honey Road Survey. In 1863 he traveled to Yosemite and painted Yosemite Valley displayed in this exhibition. Also on exhibit is Bierstadt’s El Capitan - Yosemite Valley. During the 1880s, Bierstadt continued traveling in the West, as well as journeying to Nassau, Bahamas, and throughout Europe. In 1889, he took his final trip westward.

Gil Waldman said: “Both of the Albert Bierstadt paintings and the Thomas Moran are little gems and certainly special to me. It is not necessary for a painting to be large in size to have big impact, and these are prime examples.”