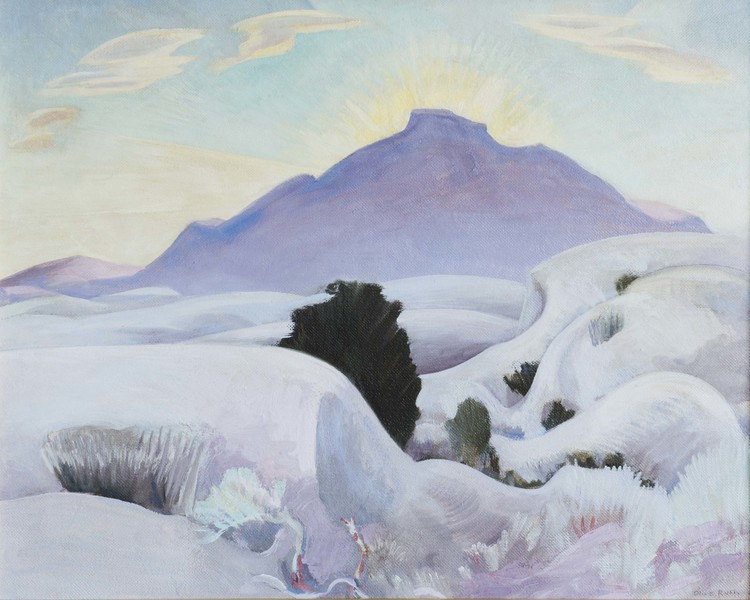 “No artist had ever recorded the New Mexico I was now seeing. No writer had ever written down the smell of this air or the feel of that morning’s sky.”

Artists have long been in love with New Mexico’s topography including the sense of unlimited space, the snow-capped Sangre de Cristo Mountains, the unique and dramatic quality of light and color, vibrant trees such as Autumn Aspens painted by Oscar Berninghaus, the expansive desert as depicted by Olive Rush’s Sunset in the White Sands Desert, the rich history of the Native Americans as portrayed by Leon Gaspard in his painting entitled The Apaches, and the Hispano cultures, their art and artifacts as evidenced by Joseph Amadeus Fleck in Fiesta Array. These early artists working in New Mexico and featured in this exhibition went on to shape popular culture’s perceptions of the American Southwest and influenced generations of artists. The Taos Society of Artists, one of the first American regional movements to achieve international acclaim, was founded in 1915 by Ernest Leonard Blumenschein, Bert Geer Phillips, Joseph Henry Sharp, Oscar Edmund Berninghaus, Eanger Irving Couse, and William Herbert “Buck” Dunton.

Today, the communities of Taos and Santa Fe remain picturesque and culturally unique towns despite the enormous changes that have taken place throughout the past 100 years. A diversity of artists including painters, writers, filmmakers, and musicians continue to reinterpret and re-create the iconic images of the ancient land and its inhabitants.

Christy Vezolles, Co-curator of this exhibition and wife of the late Gil Waldman, says: “It is not by chance that there are so many paintings by the Taos Society of Artists, or TSA, in the Waldman Collection. He and his wife Nancy became members of the Philbrook and Gilcrease museums when they moved from Albany to Tulsa in the 1950s. Before long, they began summering in New Mexico, where they joined the local art museums, attended seminars on the TSA, and began collecting in earnest in the 1980s, about the time they began spending winters in Scottsdale. The TSA paintings became the core foundation of the collection. Although Nancy passed away in 2011, Gil enthusiastically continued to add to his collection in the following years.”

Next
By Beauty Obsessed: Gilbert Waldman Collects the West
HOME