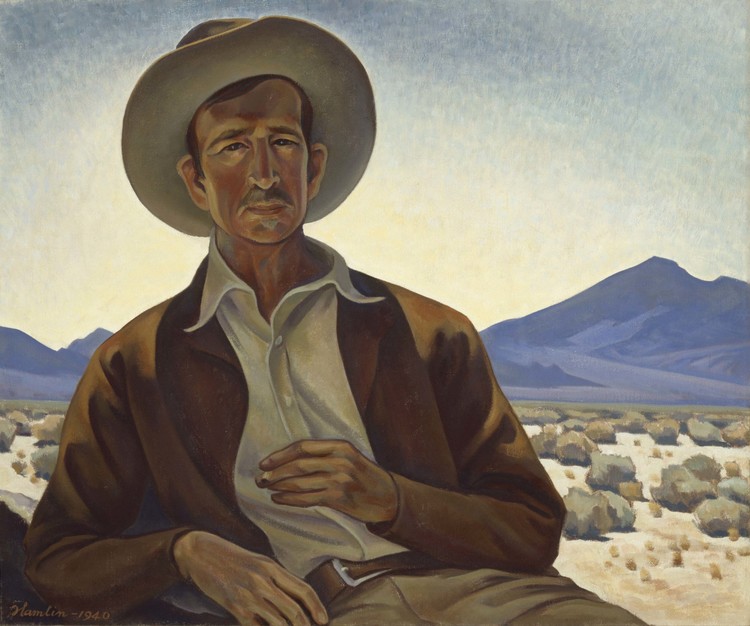 Edith Hamlin grew up in Oakland and was encouraged by her father to attend the California School of Fine Arts on a scholarship from 1922-1924. She then left for San Francisco to pursue her art career, but an illness forced her to delay her interest in the arts until 1928, when she was residing in San Diego. Beginning in 1929 and until 1932, she attended New York’s Columbia Teachers College, and she worked as a freelance decorator, taught art, and exhibited her paintings. During her time in New York, she visited Taos, New Mexico, which gave her an appreciation of the American West and this trip influenced her subsequent artwork.

Returning to California in 1933, Hamlin began to work several years later under the Works Progress Administration (or the WPA) project to do murals for San Francisco’s Mission High School, at which time she received advice from Maynard Dixon. They married in 1937, and afterward she continued to paint and serve on a number of commission projects. From 1939 until Dixon’s death in 1946, they lived at studios in Tucson, Arizona, and Mount Carmel, Utah.

In 1951, Hamlin married Frank Dale and continued to live in Arizona and Utah, traveling often throughout the American West to find subject matter for her paintings. She had numerous group and solo exhibitions, showing at venues such as the San Francisco Museum of Art; Salons of America in New York; the M E de Young Memorial Museum; the California-Pacific International Exposition in San Diego; the Dayton Art Institute in Ohio; the Dallas Museum of Fine Arts in Texas; and the Arden Studio in New York.