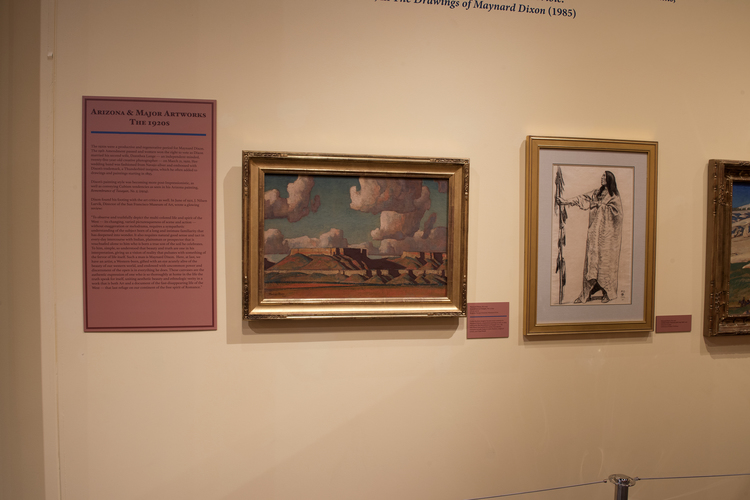 The 1920s were a productive and regenerative period for Maynard Dixon. The 19th Amendment passed and women won the right to vote as Dixon married his second wife, Dorothea Lange — an independent-minded, twenty-five-year-old creative photographer— on March 21, 1920. Her wedding band was fashioned from Navajo silver and embossed with Dixon’s trademark, a Thunderbird insignia, which he often added to drawings and paintings starting in 1895.

Dixon’s painting style was becoming more post-Impressionistic as evident in Cliffs of del Muerto (also called Canyon del Muerto), as well as conveying Cubism tendencies as seen in his Arizona painting, Remembrance of Tusayan Number 2, from 1924.

Dixon found his footing with the art critics as well. In June of 1921, J Nilsen Larvik, Director of the San Francisco Museum of Art, wrote a glowing review, saying:

“To observe and truthfully depict the multi-colored life and spirit of the West — its changing, varied picturesqueness of scene and action — without exaggeration or melodrama, requires a sympathetic understanding of the subject born of a long and intimate familiarity that has deepened into wonder. It also requires natural good sense and tact in everyday intercourse with Indian, plainsman or prospector that is vouchsafed alone to him who is born a true son of the soil he celebrates. To him, simple, so understood that beauty and truth are one in his interpretation, giving us a vision of reality that pulsates with something of the fervor of life itself. Such a man is Maynard Dixon.

Here, at last, we have an artist, a Western-born, gifted with an eye acutely alive of the beauty of our western world, and endowed with uncommon power and discernment of the open is in everything he does. These canvases are the authentic expression of one who is so thoroughly at home in the life the truth speak for itself, uniting aesthetic beauty and ethnologic verity in a work that is both Art and a document of the fast-disappearing life of the West — that last refuge on our continent of the free spirit of Romance.”