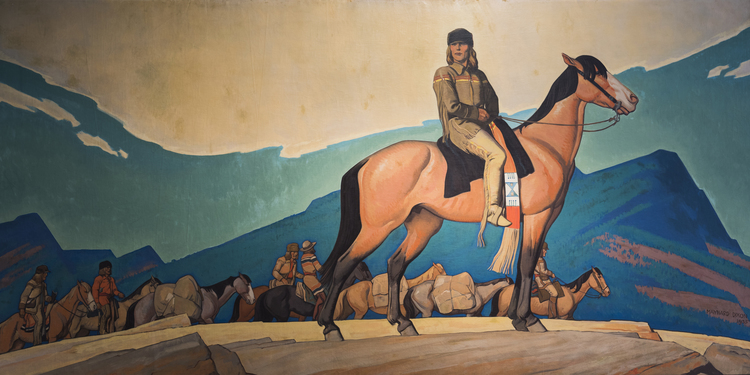 In 1805, more than 115 Navajo died at the hands of Spanish soldiers in Canyon del Muerto, Chinle, Arizona Territory. Sixty years after the massacre, frontiersman and U.S. Army Officer, Christopher “Kit” Carson and his garrison rounded up the remaining Navajo people in this same canyon, simultaneously cutting down their hundred-year-old peach orchards, a move designed to ensure pacification of the Navajo people. The majority of the Navajo were marched 450 miles to a prison camp at Bosque Redondo in eastern New Mexico. The Navajo were defeated by the same practices that helped break the back of the Confederacy.

This intention was not lost on Maynard Dixon, as he explored the complex canyon over numerous years and reflected on the military’s treatment of Native Americans. Bridging the historic past to the present, Dixon knew the Wild West performer “Buffalo Bill” Cody, and Buffalo Bill had known Kit Carson. Dixon used imagery of Carson frequently, creating several major works, including The Pathfinder, a 10-foot by 30-foot mural for the John C Fremont High School in Los Angeles, California. He completed two other large Carson-related commissions in 1935 for his friend Joe Coppa’s Kit Carson Café, a popular San Francisco restaurant at that time: the 8-foot by 17-foot Red Butte with Mountain Men, and the 8-foot by 15-foot Kit Carson with Mountain Men. The latter is on display in this exhibition, and on long-term loan from The Peterson Family Collection to Western Spirit: Scottsdale’s Museum of the West.