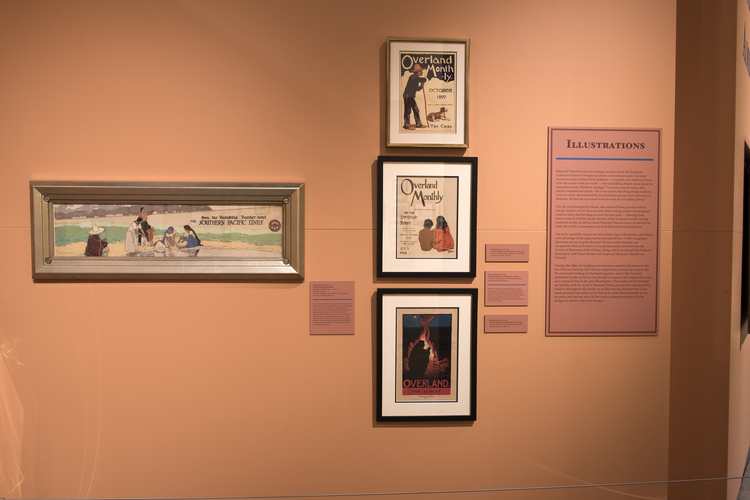 Maynard Dixon’s formal art training was short-lived. He found the California School of Design’s academic environment under the head instructor, artist Arthur Frank Mathews — a teacher who believed France to be the center of the art world — not to his liking. Dixon wrote about his experience under Mathews’ tutelage, saying, “I was just a timid country kid, maybe I expected too much—for I was used to sketching things outdoors. I was too easily disheartened by the favoritism and sarcastic criticisms of Mathews. He had me too scared to know what he was talking about.”

The shy and introspective Dixon, who suffered from periodic asthma attacks, stuck it out for three months before taking Frederic Remington’s words to heart and deciding to create his own path — drawing from nature instead of following the dictates of the academic world. Leaving academia in 1892 did not harm Maynard Dixon’s career; he decided to make the world of newspaper and book illustration his profession.

The early twentieth century was the Golden Age of illustration and Dixon took advantage of the opportunities presented him. A fully recognized illustrator, he was in great demand. Dixon’s artistic mastery was recognized years later when he was posthumously inducted into the Society of Illustrators Hall of Fame along with his boyhood idol Frederic Remington and Dixon devotee and respected illustrator Harold von Schmidt.

Between 1895 and 1896, the budding artist became a salaried illustrator for the San Francisco Morning Call’s Sunday supplement, portraying western life. He continued working for Overland magazine. In 1895 Overland published its take on Dixon, the protégé who graced the magazine’s covers, and compared him to the great Remington, saying, “The readers of the Overland are familiar with the work of Maynard Dixon, perhaps the coming rival of Frederic Remington. His hands are stuffed into his pockets; there is the usual quizzical expression on his face as he walks loose jointedly across the plaza and into my view. He has made a national reputation by his designs for posters and cover designs.”