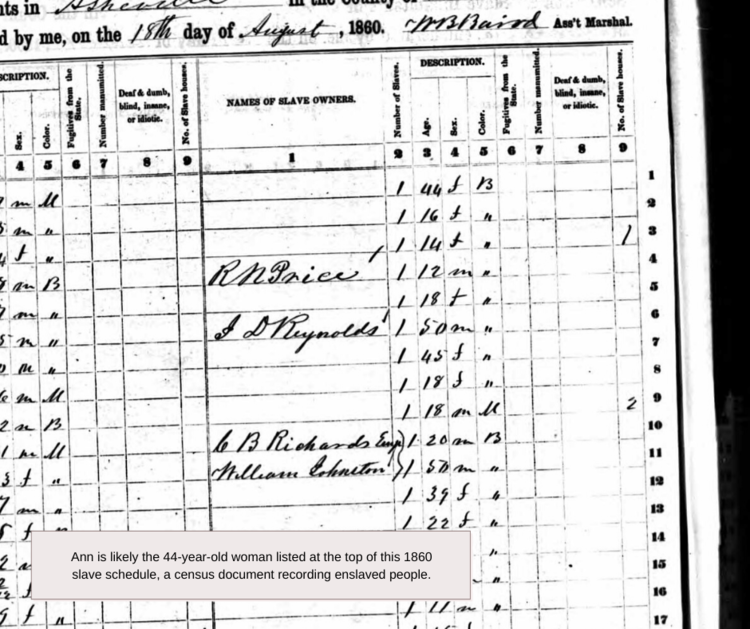 Born in 1822, Hudson was the brother of Ann and Richard (II).  According to Priscilla’s 1835 will, Hudson and his sister were not to be sold until after the death of their mother, Aggy.  However, this contradicts David Sr.’s 1813 request that any future children born to Richard (I) and Aggy be freed upon Priscilla’s death.  Hudson was sold between 1837 and 1844, since he does not appear in the David Jr. estate sale.  According to later records, Hudson was likely sold to Col. Alexander, a neighbor of the Vances.

In 1849, Hudson married Elmira “Mira” Mills, and in 1866 Hudson and Mira recorded this marriage at the Freedmen’s Bureau office in Asheville.  By 1870, the couple lived with Abraham Vance and Philis Coleman in the Reems Creek Valley; their home was next door to Richard (II) and his family.  In the 1870 census, Hudson is listed as being able to read but not write.  His personal estate was valued at $175.

At the time of the 1880 census, Hudson and Mira lived with 22-year-old Harriet Horn and her children.  While Harriet was white, her children were listed as “mulatto.”  Based on the death certificates of the younger children, Andrew and Richard, Hudson was their father.  We do not know anything more about the relationship between Harriet and Hudson.

By 1900, the widowed Hudson owned a house in French Broad township and lived alone.  A year later, Hudson married Mamie Berry.  However, he was living alone once more in 1909 when he was killed in a house fire.  According to articles in the Asheville Citizen-Times, Hudson had suffered a stroke weeks before his death and was killed when the fire he lit to warm himself got out of control.  Oral histories from Hudson’s descendants assert that the fire was set deliberately to punish Hudson for his relationship with a white woman.  Hudson was buried in the Alexander Chapel Cemetery in the Reems Creek Valley, in the plot set aside for the enslaved men, women, and children owned by the Alexanders.

One of the three known children of Richard and Aggy, Ann was born around 1815.  Unfortunately, we do not know much about Ann’s life.  Like her brother Hudson, Ann is mentioned in Priscilla Vance’s 1835 will, which stipulated that both siblings not be sold until after Aggy’s death.  However, this contradicts David Sr.’s 1813 request that any future children born to Richard and Aggy be freed upon Priscilla’s death.  Although David Vance, Jr. desired to sell Ann before his mother’s will allowed, he ultimately chose not to sell her at all.  Ann was put up for auction at the 1844 sale of David Jr.’s property and was purchased by Mira, David’s widow.  Ann then accompanied Mira and the Vance children to Asheville, where she worked in their new home.  There are no known records mentioning Ann after 1844, although she is likely one of the women listed in the 1850 and 1860 Slave Schedules for Mira Vance.