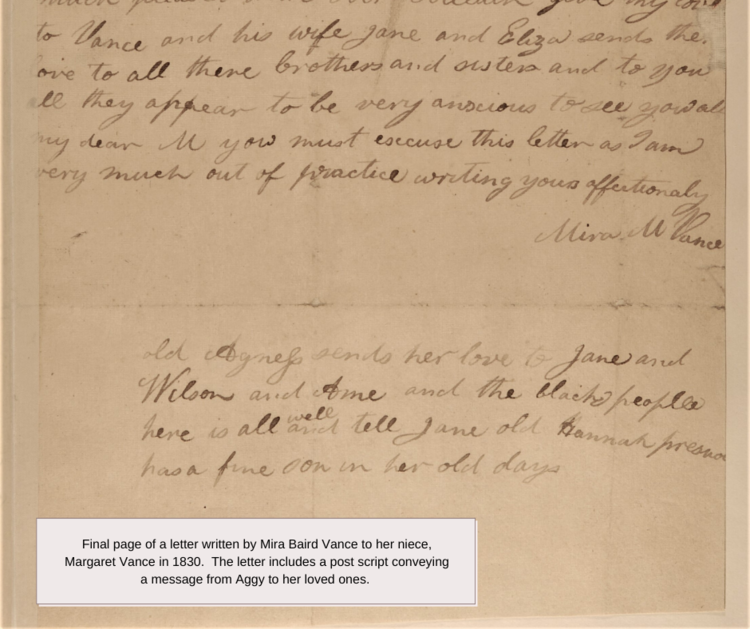 Aggy and Richard were born in Virginia.  They most likely accompanied the Vances in their migration into the Blue Ridge Mountains as two of the three enslaved people listed in David Sr.’s 1790 census record in present-day Buncombe County.  We know the names of three of Richard and Aggy’s children:  Hudson, Ann, and “young” Dick.  The couple likely had other children; one record suggests that they had at least three more sons.

In 1813, both Richard and Aggy were willed to Priscilla Vance by her husband, David Vance, Sr.  The will also states:

It is my will and desire that they have full liberty and I do by these presents give them full liberty to go and live with any of my children where their own children live, not as slaves, but as old acquaintances who have labored and spent their strength to raise my children and their own also. I enjoin upon my children who may have the children of said old Black people not to confine them, but let them go awhile to one and awhile to another where their children may be, I enjoin upon my children to see that the evening of the lives of those Black people slide down as comfortably as may be. The four negroes (and any increase that may be) it is my will and desire that my wife will them among the children at her pleasure and discretion, only keeping in view merit and necessity.”

At this time in North Carolina, freeing an enslaved person took money and approval by the county court.  Although a 1741 law determined that an enslaved person could be freed for “merituous services,” his or her enslaver would have to post a bond of $250 to ensure that he or she left the state within 90 days.  Any enslaved person who remained in North Carolina after this deadline could be arrested and sold back into slavery.  Rather than pay the bond and force Richard and Aggy to leave the state, David Vance kept the couple enslaved but trusted his wife and children to allow them some freedom after his death.

While we do not know the daily experiences of Richard and Aggy’s lives after 1813, we do know that Priscilla Vance echoed her husband’s sentiments in her own will.  Although Richard had passed away before Priscilla’s death in 1835, Aggy was still living.  Priscilla further stipulated in her will that Aggy’s children, Hudson and Ann, not be sold before their mother’s passing.  Although David Jr. apparently intended to sell Ann and Hudson before that, he appears to have abided by his mother’s request.  David eventually sold Hudson after Aggy’s death, but Ann remained enslaved by the Vances through the Civil War.

In an 1830 letter, Mira Vance, David Jr.’s wife, records a message from Aggy to Jane, an enslaved woman living with Vance relatives in Tennessee.  Aggy sent her love and wished for Jane to know that “Anne and the black people here is all well” and that “old Hannah Prestwood has a fine son in her old days.”

As one of two early African American members of the Reems Creek Presbyterian Church, Aggy’s 1837 death is documented in the church’s records.  Though Aggy remained enslaved all her life, she crafted what freedom she could within the constraints of slavery.  The nominal freedom granted to her and her husband by their enslavers, her ability to request a post-script in Mira’s letter, and her position as a member of the Vances’ own church all show Aggy’s unique status on this Reems Creek Valley plantation.