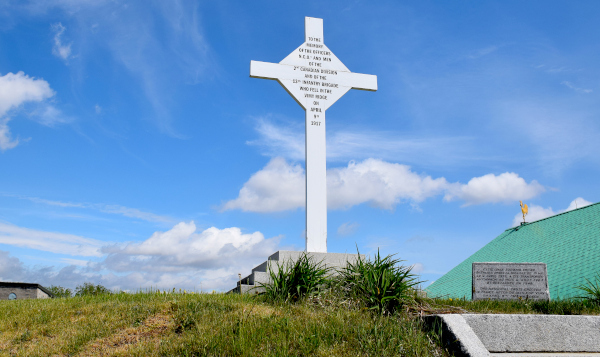 Here, you are standing in front of the Vimy Cross, a memorial to the Battle of Vimy Ridge.

The Battle of Vimy Ridge is one of the most significant events in Canadian history and of the First World War.

Located in France, the Vimy Ridge was captured and fortified by the Germans in 1914. England and France tried to retake it, without success. In three years of fighting, France alone lost 130,000 men on the ridge.

The Canadian offensive took place from April 9 to 12, 1917 and involved all four Canadian divisions. It is estimated that more than 15,000 Canadian soldiers participated in the initial attack. It was a resounding victory!

The victory at Vimy Ridge was one of the key factors in Canada’s gaining autonomy from Great Britain. This recognition of autonomy was formalized in the Statute of Westminster in 1931.

In recognition of Canada’s efforts during the Great War, France ceded the land around Vimy Ridge to Canada in 1923. Therefore, it is now Canadian territory on French soil. There is a large monument bearing the names of the 11,285 soldiers who died in France who have no known grave. This impressive monument is depicted on the $20 Canadian note.