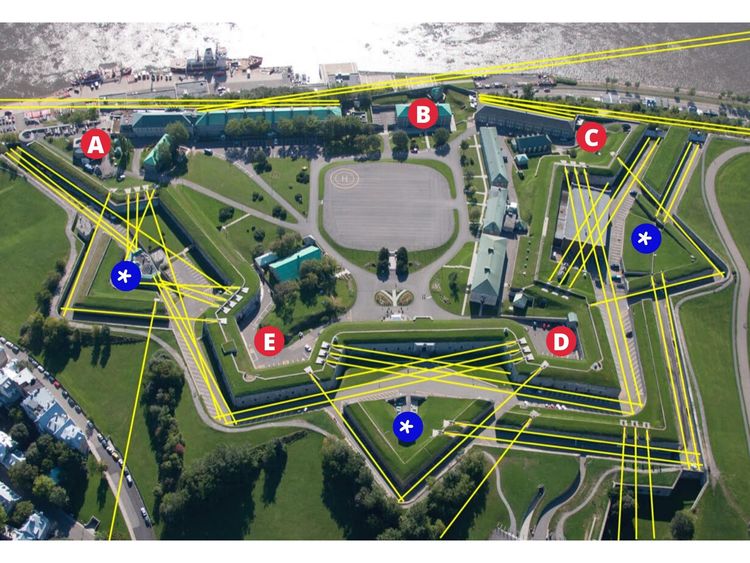 The Citadelle is a bastioned fortress built in a style known as “trace italienne”. This means that it is star-shaped and is made up of bastions. A bastion is a point of a four-sided star. One bastion is linked to another by a straight wall called a curtain wall. The Citadelle has five bastions which are identified in the photo. You are currently under the Prince of Wales Bastion, point C in the photo.

The Citadelle is also a Vauban-type fortress. Fortresses of this type have ravelins, also called half-moons, in front of the curtain walls. It is a triangular-shaped structure detached from the main wall of the fortress. They are identified by a star in the photo.

The Citadelle of Québec is therefore a Vauban-type bastioned fortress, as it has both bastions and ravelins.

The bastions and caponiers allow for flanking fire, meaning firing parallel to the walls. The yellow lines on the photo represent the possible angles of fire by guns positioned on bastions and by musket fire in the caponiers.

The guns on the bastions also provide protection to the adjacent bastions and curtain walls. This is called mutual support. With such a defence system, the fortress is protected over 360 degrees. There are no blind spots left from which the enemy could take advantage.