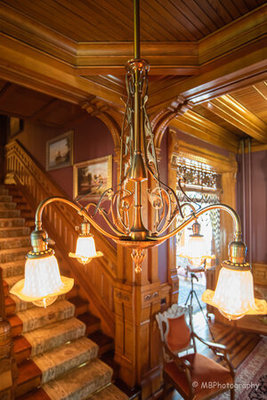 In the Fall of 1882, electricity was in its infancy. There were only three residences in the United States known to have had electric lighting when Hearthstone's was electrified in September 1882.  Two were in New York:  The William Henry Vanderbilt residence (completed January, 1882); and the J. P. Morgan residence (completed in the summer of 1882).  Another was in Chicago, the John Doan residence (electricity installed in August, 1882). Of these residences, only Hearthstone was on a central Edison system and, sadly, only Hearthstone survives.

Perhaps even more remarkable, not only does Hearthstone still stand, it still contains its original light fixtures and light switches that were used on September 3, 1882 when the residence was lit.  Made by the manufacturing firm of Bergmann & Company, where Thomas Edison was a partner, they were some of the very first devices manufactured specifically for electrical incandescent lighting.  Hearthstone's fixtures are certainly the oldest remaining examples still in use.  In fact, Hearthstone still has much of the original wiring in place (although, of course, it is unused).

This priceless collection of electrical artifacts is the subject of this self-guided tour.  Most entries feature a current photo of the fixture along with the corresponding page from the 1883 Bergmann "Illustrated Catalogue."  Some non-Bergmann historic fixtures are also included as are Hearthstone's original switches and wiring.

We start in the Grand Hall.