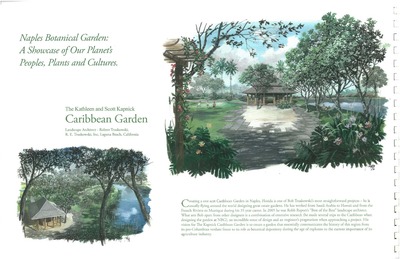 ·        The Kapnick Caribbean Garden was also part of Phase I of the Garden’s master plan. Designed by Robert Trukowski, features many edible plants grown in the Caribbean for their agricultural properties, and others for their beauty.

·        Nothing that you see in the Garden today was here before we began development. Before, the Garden was full of invasive plants such as Melaleuca and Brazilian pepper. The invasive vegetation had to be completely removed in order to restore the land to its current state. Show laminated image of the Garden pre-cultivation. The star is the Smith Entry Prow.

·        Now, many birds and fish use the brackish marshes and mangrove habitats that we have restored! After restoration, the number of species seen at the Garden during Christmas Bird Counts (CBC) increased. The CBC is an annual citizen science survey that literally counts all of the birds in a specific area

·        Birds love to use our marsh because it provides a great feeding habitat. One way we keep the habitat healthy is by maintaining the littoral zones around our lakes. A littoral zone is a buffer zone between water and land. Show image of littoral zone. By planting native grasses around our lakes, we are providing habitat for fish and birds. This zone also halts erosion and the perimeter plants pull nutrients out of runoff water.