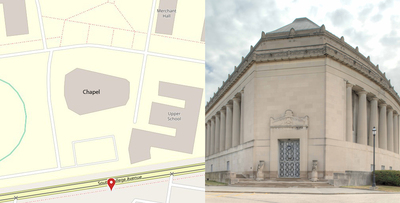 The Chapel was built in 1933 and was the result of an architectural competition, like Founder’s Hall a century earlier. Sixty applicants were narrowed down into ten finalists, and ultimately the award was given to Philadelphia’s Thomas, Martin & Kirkpatrick. Their design was created out of Indiana limestone and its unusual wedge-shape was intended to enhance the acoustics of the enormous chapel, which was built to seat 2400 people. This chapel replaced an earlier, smaller chapel, and reused the same plot of land, which at the time was surrounded by other campus buildings, since removed.  The current chapel’s steeply pitched roof provides space for a massive 6,829-pipe Skinner organ installed above the assembly space.

The design of the chapel needed to appear unified with the surrounding campus buildings, which are influenced by Greek Revival architecture. However the architect strove to ensure it would not conform to any style associated with any one denomination or sect. In his will Stephen Girard wrote that he did not want any ecclesiastic, missionary, or minister to set foot on campus. His goal was to prevent students from being whipsawed by conflicting doctrine. Following these guidelines and maintaining Girard’s vision to instill the “purest principles of morality” in students, the density of the religious education on campus has changed over the years, however the school has always been non-denominational, focusing broadly on the principles of morality and conduct, and all services have always been led by lay staff as opposed to ordained clergy.  Today, chapel services are held twice monthly and are no longer religious, but function as all-school assemblies.

Take a few steps to your left and we will stop and consider the wall itself.