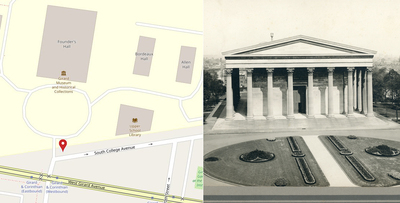 Look through the gates toward the enormous building with massive columns ahead of you. This monumental structure is Founders hall and it was built as the original classroom building for Girard College.  In his will, Stephen Girard had specifically left two million dollars to build the school. To put these numbers in perspective, when the school was built the majority of the workers were making $1-$1.50 a day. The highest paid position at the time was the marble mason supervisor who was paid $2.25 a day.

To design the original school five buildings, the directors created an architectural competition. The large budget and prestige of the project attracted national applicants. The winning architect was Thomas Ustick Walter, who would later go on to construct the Capitol dome in Washington DC, but Walter had to work within the framework of Stephen Girard’s will, which specified many of the materials and dimensions to be used in Founder’s Hall. Stephen Girard instructed that there should be four 50’ square classrooms on each of the three floors. The ceilings should be 25’ tall, which means that although the building only has 3 floors it is the equivalent of 8-10 stories. Founder’s Hall is one of the best examples of Greek Revival Architecture in America and it was designated a National Historic Landmark in 1969.

Girard College opened on January 1, 1848 and admitted the first 95 students. In the 19th century Founder’s hall was one of Philadelphia’s greatest tourist destinations and guests were even allowed to climb up on top of the roof and get a majestic view of Philadelphia. The area north of the building was a playground and  a student from the 1880s who later joined the staff claimed that the outside of the north door of Founder’s Hall there was a small pocket within the marble, with generations worth of baseballs and other lost toys  stuck in there.

Founder’s Hall continued to be used as a classroom building until 1916, at which point the newly built High School was completed. Today Founder’s Hall houses a museum and archives containing Stephen Girard’s personal belongings and papers along with school history. The museum is open for walk-in visitors on Thursdays from 9 to 2 and by appointment on other days. Check out FoundersHall.org or the Girard College website

for more information about visiting. The impressive historic building is also an event venue for proms, dinners, meetings, and wedding receptions. If you’re interested in renting space for your upcoming event, more information can also be found on the Girard College website.

Now turn to your right and walk over to the large blue state historic marker.