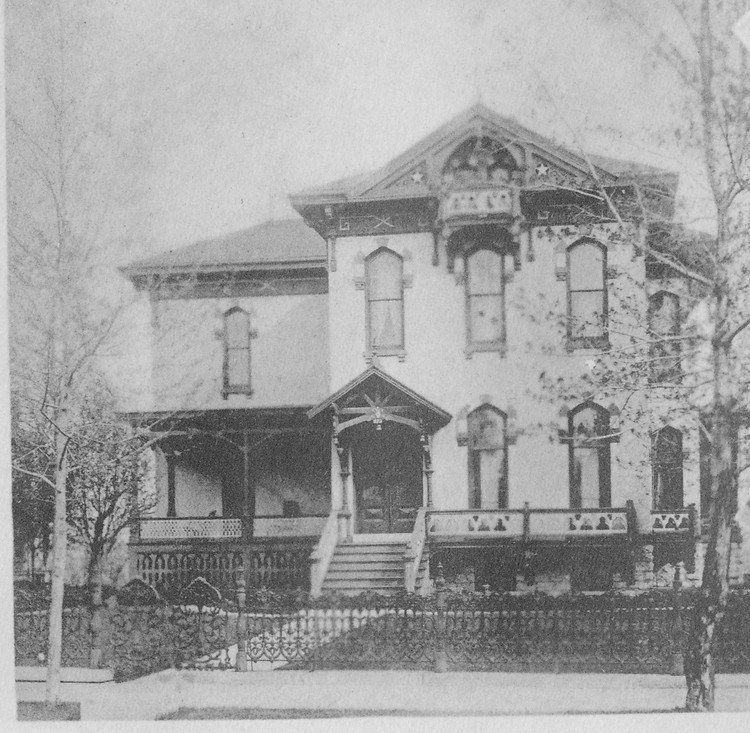 William Grant Whorton built a stunning brick home on this site in 1876, next to the home of his brother John Whorton who lived in the beautiful Italianate home on the right (the prior stop).  Unlike John's residence, William's home no longer stands.

When it was constructed, the home was touted in the local papers as featuring "lofty stories" and a "massive appearance."  In fact, newspaper reports put the interior at 20,000 square feet.  The rooms and interior finishes were the subject of detailed descriptions and laudatory comments praising the artisans.  This is not surprising considering that the home cost a equally massive amount - $10,000 - or two to three times the cost of a typical mansion of the day.

In 1884, the home was sold to John Van Nortwick, paper baron and business partner of Henry Rogers.  John and his brother William Van Nortwick came from a paper-making family outside of Chicago.  They combined their expertise with the fortunes made by Henry Rogers, in silver mining and railroad financing, to create a paper empire along the Fox River.  Their holdings dwarfed most of their competition, being a close second to only Kimberly and Clark.

John was also a partner with Henry in controlling all of the dams, canals, and water-power rights along the river.  This directly led to Rogers' success in using water power to electrify the city.  The Van Nortwicks also founded the town of Combined Locks, which is located a few miles down river from Appleton.

In 1932, the Van Nortwick estate planned to sell the residence to the city for use as a home for forty crippled children.  However, opposition by 38 neighborhood residents defeated the proposal.  As stated in the local newspaper, the residents insisted that while they were "heartily in favor of the attempt to establish a crippled children school, they object strenuously to the proposed location."  The reason:  They feared it would depress property values.  Without another buyer, the home was demolished.

The land was bought by Joseph Plank (whose house is another stop on this tour).  Plank built several small homes on the property for his children which still stand.