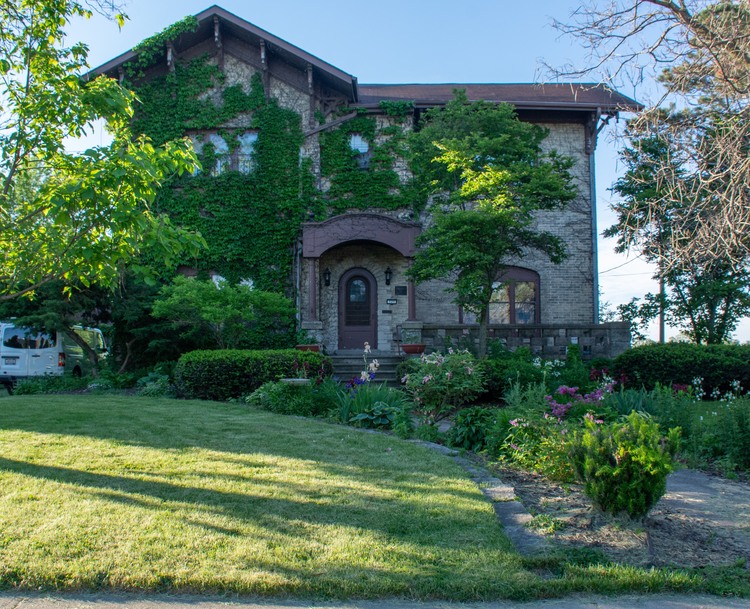 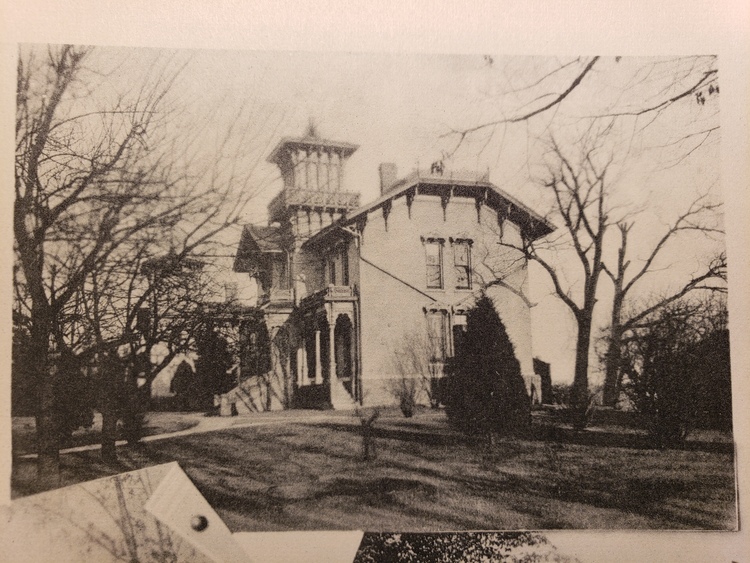 Called “one of the handsomest residences in the city” when it was constructed in 1872, this Italian Villa style home was also designed by renowned architect William Waters.

While still impressive, the home has lost much of its grandeur as well as much of its ornate Italian-style decorative elements over the years.  Losses include the entire east wing and the hip-roofed observatory, a square tower that rose above the second floor existing remnants.  The observatory offered “a view of the whole city.”  The front facade also included stone steps and low walls leading to an ornate stone portico over the front door.  A heavily decorated porch once stood in front of the arched window, where the low open concrete block balustrades now stand.  The Italianate cornice board and scrolled brackets with pendants survive.

Most of the appearance now stems from a 1942 well-executed remodel that created a fine example of Italian Renaissance Revival style.  This includes the grouped windows, brick surrounds to match the exterior, the small wrought-iron balconies, and the arched portal over the front door.

The house was built by Ephraim and Louise Goff.  Ephraim was mayor of Appleton at the time.  Later, he was also President of the Appleton Gas Light Company (supplying gas for lighting to city homes) and eventually President of Commercial National Bank.

When construction began, the Appleton Crescent newspaper described the dimensions and function of every room (including the basement).  The paper claimed that the house “bids fair to excel in beauty and general convenience anything of the kind in the city.”  Grand in almost every way, the house boasted 12 and half foot ceilings on the first floor and 11 foot ceilings on the second.  The lost east wing had a first floor master suite (with a plumbed bath, this despite Appleton not having city water at the time) and connected conservatory and sitting room.  The west wing held the dining room, kitchen, pantry, and china closet.  Upstairs offered six rooms including another bath.

This home is located in the West Prospect Avenue Historic District which is listed in the State and National Registers of Historic Places.

Interestingly, the home served as a maternity ward starting in 1912, run by two female physicians, Dr. Maud Pratt and Dr. Meta Jones.  Drs. Pratt and Jones purchased the home from Thomas Pearson, the second owner of the house, who acquired it in 1902.  The ward operated until 1919.  In 1942, Dr. Pratt sold the house to William and Rose Kaminsky who did the extensive remodeling.