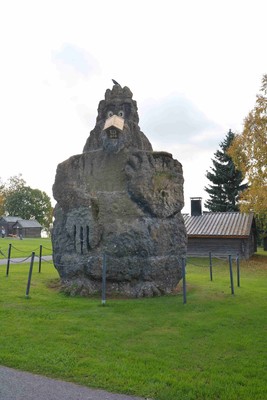 And now everyone' favorite, the Giant Jorm. On September 26, 1974, this concrete giant was unveiled by Beppe Wolgers and the cartoonist Per Ahlin. That same night, the world premiere of the film “Dunderklumpen” took place at the Sagabiografen here in Stromsund. The giant is 7 m tall, weighs about 25 tons and is joined together by one meter high concrete rings. During the summer you can hear the whole story about "Dunderklumpen" from the Giant Jorm.