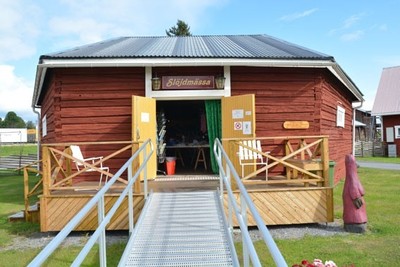 Just to the right you will find this hexagonal barn. It originally comes from Lillviken and was built in the late 19th century. It was mainly used for threshing with a horse. The barn was moved to the outdoor museum in the 1960’s and has been used for the yearly craft fair since the 70’s.

Just before the path curves to the right you can see the lodge from Kärrnäs. It is the only remaining building from the farm Kärrgärde, built in 1796 and demolished in 1946.