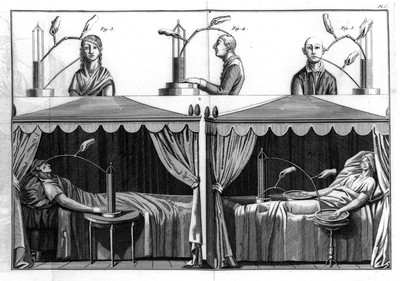 Hello, my name is Andre Phillips. I'm the Youth and Family Programs Manager here, and I'd like to tell you about the Galvanis and animal electricity.

In 1780, Italian physician Luigi Galvani, along with his wife and assistant Lucia, made an unintentional discovery after a metal scalpel touched a frog leg which was being used for an experiment, and the leg twitched. The Galvanis concluded that there was an electrical fluid in the frog, and they started referring to what they called "animal electricity."  Galvani said that the electricity was coming from the dead frog, but Alessandro Volta, an Italian physicist of the time, showed that, in fact, it was the metal around the frog that was generating the electricity.

Galvani's nephew Giovanni Aldini then made a name for himself by famously demonstrating this new phenomenon of "galvanism"; or what is now called electrophysiology.  He used Volta's creation, known as voltaic piles, to stimulate movement in humans and animals before and after death.  These events are credited by Mary Shelley with helping to inspire her novel Frankenstein, and of course, these scientists have had an enormous impact on today's world by leading the way to batteries, defibrillators, pacemakers, and more.