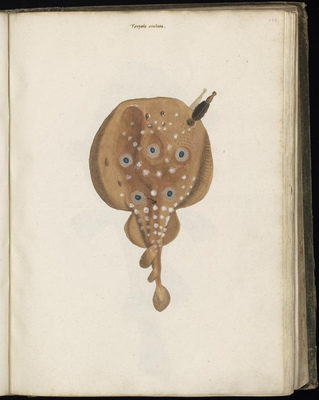 Hello, my name is Sofia Lindgren-Galloway. I am the Outreach Programs Coordinator here at the museum.  One of my favorite electricity stories comes from ancient Rome.

In 46 A.D., in Rome, there was a doctor named Scribonius Largus. He had a patient whose foot hurt. This was way before people had things like Tylenol or Asprin, so Scribonius told the patient to walk around in the ocean and maybe his foot would feel better.

While walking, the patient stepped on something strange. The strange thing gave him a little shock, but then his foot felt better! Scribonius figured out the strange thing was a Torpedo Fish, which is a lot like a stingray, and when the torpedo fish gets scared it shocks its predator (in this case, the patient that stepped on it.) A shock from the torpedo fish to a specific body part would make that body part feel a little numb, so a patient couldn’t feel the pain.

Scribonius started using the fish in his medical practice and shocked people’s feet, heads, stomachs, hands, etc. The numbness probably didn’t last long, and sticking your head in a tank of fish that produce electricity was probably pretty weird.

That same idea of using electricity to relieve pain was still being used 100 years ago when Electricity is Life machines, like the one in front of you, were popular. We still use electricity in medicine today, like in a defibrillator, which shocks a heart that has stopped beating.