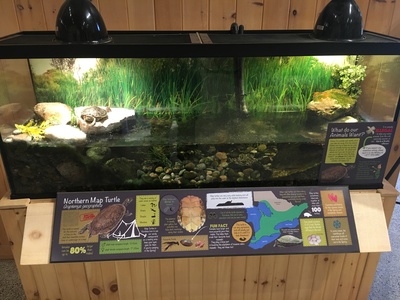 One of the other turtles that lives in Rondeau is the Northern Map Turtle.

The Northern Map Turtle is named for the network of lines on the shell that resemble contour lines or waterways on a map.

Map Turtles in Rondeau love to use our sandy campground as a nesting area.

Courtship and mating for this species occurs in the Spring and sometimes Autumn.

One clutch contains 6-20 oval, flexible eggs that the female will bury in the nest.

In some cases, hatchlings will overwinter inside of their nest and come out in the spring.

Map Turtles are quite abundant in the park and are often spotted basking on logs in the sloughs.

They will use a variety of water areas as habitat including: lakes, rivers, sloughs, and marshes.

The females are often 80% larger than the males and thus have a stronger jaw as well.

This jaw helps them crush their favourite food: mussels!

They play a large part in lowering the population of invasive zebra mussels - they eat these too!

Map Turtles are also a special concern due to their populations being lowered by predation, habitat loss, and road mortality.

Here at Rondeau we also have a turtle research team who help to research and protect our turtle species in the summer months.