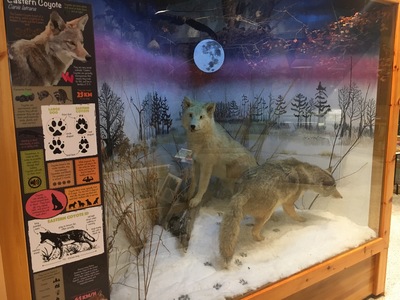 They are very social animals, generally monogamous, and live in families of 3 to 5.

Coyotes are more active and vocal at dusk/dawn and at night.

For their diet, Coyotes are opportunists, which means they will eat whatever they can get, from small mammals, birds, plants, and even carrion!

Hunting is done individually, in pairs, or in small family units.

Sometimes, to make as little noise as possible while walking through their habitat, Coyotes will walk on their toes!

Coyotes breed in the cooler months, any time between December and March.

The gestation period is around 2 months.

While pregnant, the mother will stay in the den while the father hunts and brings her food to keep her healthy and strong.

For the first 10 days of their life, the pups are blind and need their mother's milk to survive.

Among many Native American tribes in the United States, the Coyote is a large part of their culture, myths and legends - playing the role of hero, trickster, immortal, and respected animal.

Coyotes have long pointed ears, grey to brown fur, a large bushy tail with a black tip, a narrow snout and can be about 75-100cm long.

They typically will be seen in natural and human environments including: forests, farm fields, marshes, and suburban areas.

However, the coyotes here in Rondeau are very skiddish of people and are rarely seen.