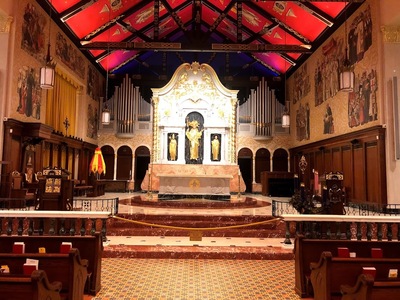 While standing here you are looking at the sanctuary area. In this area we have the main altar. Above and behind the main altar, you can see three statues.

In the center, is a high relief depiction of the Risen Christ as King, flanked by statues of Saint Peter on the right, and, Saint Augustine on the left.

Towards the left side you can see the Bishops chair called a "cathedra", the Latin word for chair, which is where the name cathedral comes from.

Our Cathedral has been raised to the status of minor basilica.

The word basilica is derived from a Greek term meaning “royal house.” In the Catholic church, a basilica is a church building that has been accorded special privileges by the pope. There are two kinds of basilicas. The world’s four major, or papal, basilicas are in Rome. Minor basilicas are traditionally named because of their antiquity, dignity, historical value, architectural and artistic worth, or significance as centers of worship.

Towards the rear on the chair side you can see one of the three physical signs indicating that a church is a minor basilica. The first is the presence of the Ombrellino, a silk canopy designed with stripes of yellow and red, traditional papal colors.

The second is the tintinnabulum, or bell. You can see it in front of the organ console, on the right side and rear of the sanctuary. It is mounted on a pole and carried processionally, along with the Ombrellino, at the head of the clergy on special occasions.

Third, minor basilicas have the right to display the papal symbol, crossed keys on banners, on furnishings, and on the seal of the basilica.

As you look up on the side walls on each side of the upper sanctuary area, you can see several of the many murals that are throughout the cathedral. They were painted by artist Hugo Ohlms for the renovation in 1965. On the upper, left wall, you will see scenes that depict the early church in Florida including this cathedral.

On the upper right side wall, you can see scenes depicting the history of the Catholic Church.

Let's move to the next stop.

Please walk to the front of the first pew in the west transept.

Then start the next stop.