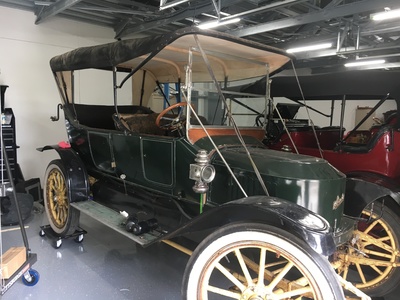 A product of the Stanley Motor Carriage Company of Newton Massachusetts, the 1912  Model 73 five-passenger touring car represents the first year the manufacturer introduced aluminum over ash bodies on their automobiles. Previous year models were made entirely of wood. As the name implies, Stanley Steamers operate on steam and don't contain an internal combustion engine. The steam is generated in a boiler that contains many vertical tubes which transfer heat to the water. The high pressure steam is sent to the pistons to operate the engine. Despite this, no Stanley boiler has ever exploded. This Stanley Register "Car of Record" boasts a rich history, its owners notable in the Stanley community. A multi-year restoration beginning in 2017 has seen the complete overhaul of the Stanley from top to bottom. It has been said that in order to drive a Stanley one must first learn to drive without watching the road because of the many gauges on the dash that required attention and adjustment during the Stanley's operation.