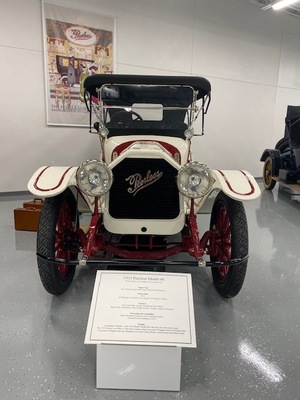 Regarded as one of the three "Ps" of motordom along with Pierce-Arrow and Packard, Peerless was a luxury car, solidly built and meticulously crafted of the finest materials. A strong competitor to Pierce-Arrow, Peerless manufactured automobiles in Cleveland Ohio from 1900 to 1931.

The 1915 Peerless was owned by a single family before joining The Collection. Pennsylvania cigar maker Henry Hackman was the original owner. Henry was a family man who needed a large automobile to transport his wife and five children. His grandson, James, later restored the Peerless in the colors of his stable: white, burgandy and black. Well-known restorer Al Markunas completed the restoration on the Peerless. Markunas also oversaw the restoration of the presidential Pierce-Arrow, a credit to his expertise and to the impeccable restoration completed upon the 1915 Peerless.