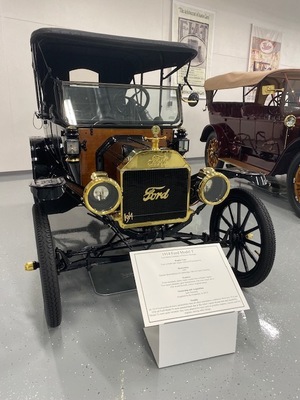 The Model T gave rise to the assembly line and mass production, which led to cars being produced at a fraction of the cost they once were. The Model T was so affordable it could be purchased by Ford's factory workers, a concept previously unheard of. In 1914 Ford produced more automobiles than all other automakers combined. By 1924 half the cars on earth were Model Ts. The 1914 Model T has a water-cooled four-cylinder gas engine rated at 20 horsepower. It has a two-speed planetary transmission with rear-wheel drive. It features correct original lamps and is painted black. Between 1914 and 1926 all Model Ts were painted black due to the color's quick drying-time and durability. Henry Ford famously stated, "The customer can have any color he wants, as long as its black." Model Ts were quite versatile: they were used as portable engines, tractors, fire engines and even popcorn trucks.