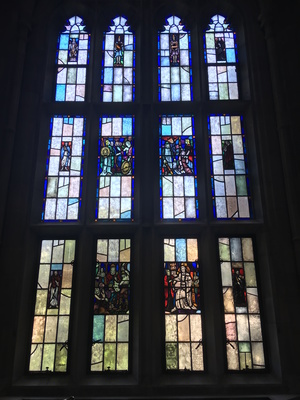 The windows in the Bapst building constitute some of the most interesting and artistic features of the Library.  Designed by Earl Sanborn and executed in his Boston studio, the windows have frequently elicited high praise from distinguished critics of art.  Each window has a theme related to an academic subject, Jesuit education or distinguished Jesuits. For example, the Bapst Library staircase windows depict works and characters from Shakespeare and the Genesis of the Book.

The general theme of the windows in Gargan Hall (the second floor reading room) is the curriculum of studies in Jesuit Colleges and Universities. The windows are uniform, comprised of four columns and three rows. The title panels and scenes of the subject appear in the two middle columns. Distinguished people affiliated with the subject are pictured in the two outer columns. This audio tour primarily addresses the subjects in the middle columns.

Other areas of the Bapst building have windows depicting the seals of Jesuit colleges and universities in the Americas, Geoffrey Chaucer, and Jesuit pioneers of the Americas.