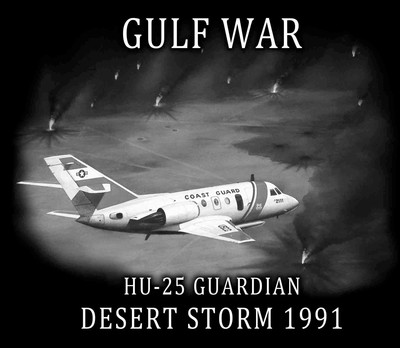 The 7th image is of the Gulf War, H U 25 Guardian, Desert Storm, 1991.  Hussein’s ecological war on the Persian Gulf worked much like any other major oil spills.  Pilor Cmdr. Tom Seckler said, “As the oil begins to come out and spread, the dynamics of how it spreads, is really sophisticated. We coordinated with containment and cleanup experts, and specialists in oceanography, and acted as a sensor gatherer for them. We made trajectory maps, which showed not only where the oil was, but where it was going. We also used ultraviolet and infrared sensors to ‘type’ the oil, and observe temperature differences. The H U 25 B also had a KS 87 B photo-recce camera, mounted just forward of the crew entrance door, which helped with every aspect of this work.”