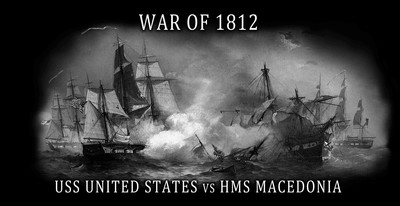 The first image is of the War of 1812, USS United States vs HMS Macedonia.   The capture of HMS Macedonia was a naval action fought near Madeira, on the 25th of October 1812, between the heavy frigate USS United States, commanded by Stephen Decatur, and the frigate HMS Macedonia, under the command of John Surman Carden.   The American vessel won the long bloody battle, capturing and bringing Macedonia back to the United States.  It was the first British warship to ever be brought into an American harbor.