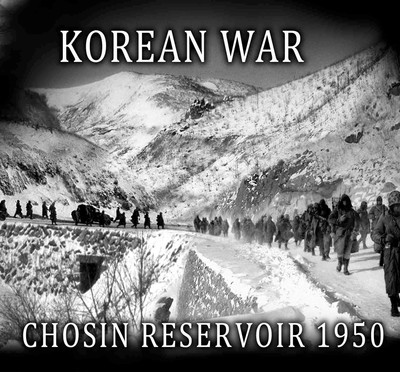 Korean War, Chosin Reservoir 1950:  The Chosin Reservoir battle has become one of the most storied exploits of grit and sacrifice in Marine Corps history. This image illustrates how the soldiers entered the mountains and hiked in and out on foot during harsh winter conditions to reach the battle theater.

In the words of Commanding General Oliver P Smith: “Retreat hell, We’re not retreating. We’re just advancing in another direction.”  Regimental commander, Lt. General Chesty Puller said this, “All right, they’re on our left, they’re on our right, they’re in front of us, they’re behind us…..they can’t get away this time”.   Puller is the most decorated Marine in their storied history.

The next stop on this audio tour is the Cold War.