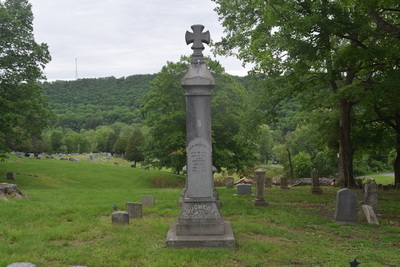 My father was an Irish immigrant who settled down in McVeytown, just down the river from here. As I grew up, I watched travelers pass up and down the Juniata, which inspired me to become involved in the creation of the Pennsylvania Canal. The canal was an engineering marvel that opened up new areas of the state for commerce and shipping. My vision and inventiveness led to my inventing a portable iron second boat for use on the canal to allow the boats to be separated in order to cross mountains.

When the canal era moved aside to make way for the railroad, I was instrumental in determining the path the rails would take. My inventiveness came in handy again when I designed inclined planes to span the distance over the Allegheny Mountains.

My endeavors helped me to amass a great deal of wealth - I was a millionaire back then - and I shared my fortune with others. I donated funds to be used to establish the St. Catherine of Siena Catholic Church in Mount Union, where I lived.
Somehow, though, I lost it all. When I died, it was said I was penniless. I would disagree. My legacy was never going to be financial. I made my mark in my community and many others built on my creativity and vision.