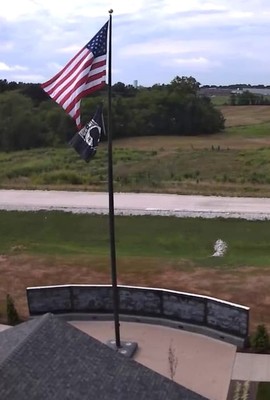 Prominently located on the South side of the building, the Honor Flag Memorial Wall is made of granite, etched with action shots of iconic historical battles of each of the five United States Armed Forces. It is nestled beneath a 50 foot tall Honor Flag and greeted by a patio of tribute bricks.  A Prisoner of War flag hangs below the U S flag.  The Honor Flag patio provides the MNVM with an intimate, contem plative space in which to hold small memorial services and other ceremonies.

The Wall is divided into 5 panels, each representing a Branch of the Armed Forces. The 5 branches are displayed from left to right, starting with the U.S. Army, then the U.S. Marines, the U.S. Navy, the U.S. Air Force, and the U.S. Coast Guard. The images depict soldiers, military equipment, formations, and battles.  The images and this narrative are generally placed in time sequence like a book reads, starting at top left, then to the right, down to the next line. The earliest image for each Branch is in the upper left corner, and the latest image is in the bottom right.  The images on all five of the Branch panels are sequenced in a similar timeline. Audio tours of each panel are available by scanning the corresponding QR codes found on the Audio Tours brochure. Ear buds are available for purchase at the gift shop.

Tribute bricks, trees and benches are also available for purchase to honor our veterans.These you will see dispersed throughout the MNVM grounds. Any of our Volunteers will be happy to tell you more about these items.