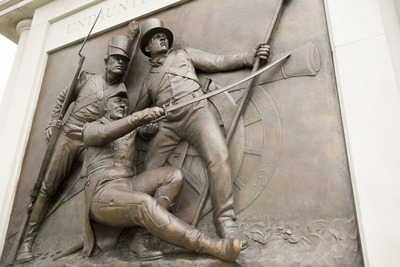 A British corporal from the 85th Light Infantry found Barney lying in his blood by a gun battery, still tended by Huffington.  The commodore was not going to surrender to an enlisted man, and he directed the soldier to find an officer to handle the matter with proper decorum.  The soldier promptly returned with Captain Jonathan Wainwright, commander of the Albion.  Learning the infamous Joshua Barney was finally in British hands, Wainwright went to find the admiral.

The commodore’s impertinence aside, the two British commanders had been much impressed by Barney’s fearless fight and summed an army surgeon to treat his wound. “Those officers behaved to me with the most marked attention, respect and politeness,” Barney later said.  “Well, Admiral, you have got hold of me at last,” Barney told Cockburn.  Cockburn was magnanimous in victory.  “Do not let us speak on that subject, COmmodore,” Cockburn replied.  “I regret to see you in this state.  I hope you are not seriously hurt.”  “Quite enough to prevent my giving you any trouble for some time,” said Barney.  Ross turned to Cockburn.  “I told you it was the flotillamen,” he said. “Yes!” the admiral declared. “You were right, though I could not believe you.  They have given us the only fight we have had.”

The general then turned to Barney. “Commodore Barney, you are paroled, where do you wish to be conveyed?” It was a generous gesture of respect, sparing Barney the indignity of being held prisoner.  Barney asked to be taken to Bladensburg, having no interest in seeing the capital in British hands.

Shortly before 3pm in Washington DC, a lone rider galloped down Pennsylvania Avenue, covered with dust.  James Smith, Madison’s manservant, rode up to the President’s House, waving his hat, and crying, “Clear out, clear out!” The British had crossed the river at Bladensburg and were rapidly marching on to the city, Smith announced.  The American troops had broken and run.  The president wanted “his lady to quit the city immediately.”  Then all was confusion.