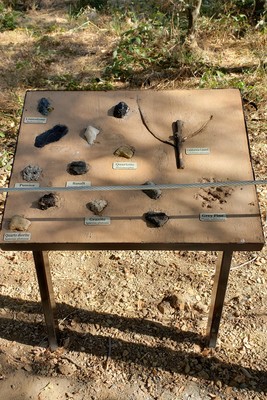 Welcome to the 4th point of interest along the sensory trail. Located between the 4th and 5th posts sits a tactile sign. Start your exploration in the upper right hand side of the sign.

You should feel the branch of Umbellularia californica, commonly known as California Laurel.

California bay laurels are broad-leaved evergreen trees with rounded, oblong, or pyramidal (pyramid-shaped) crowns. They are in the same family as avocados—the Lauraceae. Young trees have smooth bark, but as they age, the bark turns flaky and scaly. The most noticeable feature of this tree isn’t its looks, but its aroma. The early settlers of the West gave this species the nickname “pepperwood,” because when the thick, dark green leaves are crushed, they give off a scent like pepper. In fact, parts of California bay laurels have been used by American Indian tribes for hundreds of years as food seasoning. Dried leaves are still used today to add flavor to meals, although some people are severely allergic to the spicy oils in the leaves. Deer eat California bay laurel leaves, shoots, and twigs, which are very high in protein. Mammals large and small use the trees for cover, and many bird species select California bay laurels for nest sites. California bay laurels, which grow well along waterways, have been used to restore stream channels and prevent flooding.

Just below and to the right is the imprint of a pinecone from Pinus Sabiniana, commonly known as the Gray Pine. This native tree reaches 114ft in height with a trunk less than 6 feet wide. The trunk often grows in a crooked fashion and is deeply grooved when mature. The seed cone of gray pine is pendent, and opens slowly during the second season, dispersing winged seeds. Numerous birds feed on the seeds of gray pine including the red-shafted flicker, California jay, and band-tailed pigeon. The foliage, bark, and seeds provide food for black bears, Douglas chickarees, and gray squirrels. Bacl-talied deer browse the foliage and twigs.

Just down and to the left is a basalt rock. Basalt is a dark-colored, fine-grained, igneous rock. Igneous rock is formed when magma cools and solidifies, it may do this above or below the Earth's surface. Basalt is also an abundant rock found on the Moon with much of its surface underlain by basaltic lava flows and flood basalts as well, with the areas known as "lunar maria.

Just to the left is a granite rock. Granite is a light-colored igneous rock with grains large enough to be visible with the unaided eye. It forms from the slow crystallization of magma below Earth's surface. Granite is a common rock that contains at least 25% quartz and is sometimes used in construction because of its strength

Just to the left is a Scoria rock, commonly referred to as Lava Rock. Scoria is a dark-colored igneous rock with abundant round bubble-like cavities known as vesicles. It ranges in color from black or dark gray to deep reddish brown. Magma containing abundant dissolved gas flows from a volcano or is blown out during an eruption results in the formation of scoria.

Just down and to the left you will find a Quartz diorite rock. Quartz is an igneous rock, and the second most commonly found mineral on earth. Quartz is so abundant that almost every rock contains at least a small amount of it. There are many uses for quartz because it can conduct electricity under pressure.

Directly above you will find a pumice rock. Pumice is a light-colored, extremely porous igneous rock that forms during explosive volcanic eruptions. Pumice can float for very long periods of time, some floating for years before becoming waterlogged and sinking. Large masses of floating pumice are able to be tracked by satellites and are referred to as "pumice rafts." They can be a hazard to ships that sail through them. Pumice use in the United States is most often used for the production of lightweight concrete blocks and other concrete products. The concrete is mixed and the vesicles remain partially filled with air.

Just above you will come across a piece of slate. Slate is a metamorphic rock that forms from mudstone or shale. The mudstone or shale normally contains clay or volcanic ash. Slate is unique in that it does not require any type of cementation to hold its particles together. It has a very attractive appearance and it is also durable. School children used pieces of slate as a writing board to practice their math and writing during the 1800s. Chalk boards are made of slate and chalk is made of limestone, another type of rock.

Just to the left you will find a dolomite rock. Dolomite, also known as "dolostone" and "dolomite rock," is a sedimentary made up of calcium magnesium carbonate and most likely exists in sedimentary or metamorphic rocks. Dolomite is commonly found in many European areas, Canada, and Africa. It does not form on the Earth's surface; it forms underground in ancient rock and is actually a type of limestone. It is used in the manufacturing magnesium salts, and bricks that are used to produce steel.

Just slightly below and to the right is a quartzite rock. Quartzite is a non-foliated metamorphic rock composed almost entirely of quartz. It forms when a quartz-rich sandstone is altered by the heat, pressure, and chemical activity of metamorphism. At least ninety percent of a quartzite rock is quartz.  The purest form of silica found on Earth can be found in quartzite. Because of the high amount of silica in quartzite, the soil around the developing quartzite does not have enough nutrients to sustain vegetation.

Just above is an obsidian rock. Obsidian is an igneous rock that forms when molten rock cools very rapidly. The result is a rock that cooled so fast, crystals did not get a chance to form. It is a volcanic glass with a smooth and uniform structure that only forms near active volcanoes. When obsidian breaks, the fractures are very sharp which is why it was used as tools in the Stone Age.  Although most rocks that form in the Earth's crust are very old, obsidian is rarely older than 20 million years old which is young for a rock.

Last but not least, directly to the left is a limestone rock. Limestone is a sedimentary rock that contains at least 50% calcium carbonate (CaCO3). Because sedimentary rocks are made of various types of sediments, the other 50% of a limestone rock could be virtually any other mineral. Limestone originates in wet areas which mean it could also be composed of shells and waste matter from organisms. Chalk is a type of limestone that contains mostly shells from marine animals. During the 1700s, limestone was used for lithography which is when pictures are drawn on stones and then copied to other stones.