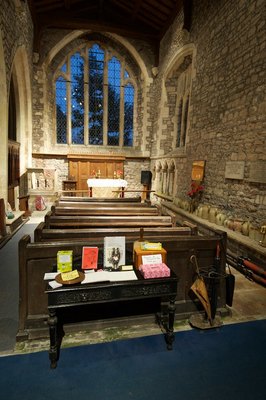 You are now standing in the Berkeley Chapel dedicated to St Mary the Virgin. It was built by Lord Berkeley in 1189 who had his main castle in Berkeley, Gloucestershire. The family also had a manor house in Portbury above Oakham Farm. The chapel was re-endowed in 1337 by Thomas Lord Berkeley in memory of his mother Lady Eva de la Zouche who died in 1314. A crypt was created beneath the chapel where she was buried according to family documents. The oak pews date from late 16th century and prior to these there was only the stone seats around the walls which provided seating for the elderly and infirm. Look up and notice the 13th century corbels depicting the Court of Henry II. Note the triple sedilia on the south wall for the clergy to sit and the piscina to wash the communion  plates.

Within this chapel is the small door to the priest room on the left with its 30 stone steps. The  Norman stone  font stands in the original position close to the entrance as a welcome into the body of the church. There would have been inscriptions and decorative carving but it was hacked off during the Cromwellian period.